END_OF_DOCUMENT_TOKEN_TO_BE_REPLACED

No Sleep ’till Hell’s Kitchen…
Well I stayed up all night and binge watched The Defenders straight through. That was fun. At a brisk 8 episodes I think it tied up the plot lines of the Disney/Marvel/Netflix “street level” superhero universe quite nicely. Punisher is waiting in the wings.

Looking toward to the next big screen Marvel outing, we’re headed back into cosmic, mythical and magical territory on November 3, 2017 with Thor: Ragnarok. Trailers so far are looking good. Planet Hulk, Hela, the Fenris Wolf and the fire giant Sutr. I’m in.

END_OF_DOCUMENT_TOKEN_TO_BE_REPLACED

Younger Than Yesterday…
Fans of artist Skottie Young can mount their hobby horses and wave their 10 gallon hats for the just revealed variant cover of Marvel Comics‘ 1872 #1 on sale July 1, 2015. I love Young’s “little kid” spin on the superheroes of Marvel. They rarely fail to make me smile. I hope his designs find their way into an expanded line of collector toys and figures.


Red, White, and Blue Badge of Courage…
The Secret Wars story, written by Gerry Duggan and drawn by Nik Virella, follows Steve Rogers (Captain America) as the sheriff of a small town called Timely (wink, wink) in the burgeoning American West of the 19th century. It joins the juggernaut of announced Battleworld warzones rattling the Marvel universe to shreds.


SkeletonPete Says…
Seems like time to put on an Ennio Morricone soundtrack, kick back with a shot of “rot gut”, and dig into a very different view of your favorite superheroes and villains.


Some Assembly Required…
If you’re considering camping out to see the first screening of Marvels’ Avengers 2: the Age of Ultron, you might also have to factor in a stint in front of your local comic book shop. Coming from Marvel Comics in April, just weeks before the May 1, 2015 premiere of the film, will be the release of the first issues of the Ultron Forever series, encompassing Avengers, New Avengers and Ultimate Avengers titles. 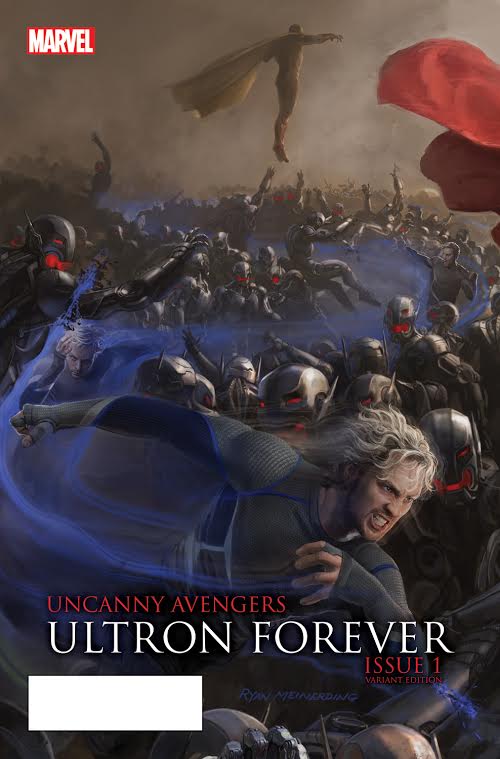