END_OF_DOCUMENT_TOKEN_TO_BE_REPLACED
Girl Trouble…
Even the infamous Joker has his hands full when the ladies of DC comics get their own line of collectibles. The company’s Bombshells statues have recast their fantasy heroines and villainesses in the style of 1940’s pinups. Artist Ant Lucia began creating these vivacious calendar girls for DC Collectibles back in 2012. The first in the series, a “Rosie the Riveter” style Wonder Woman, set the tone, with Supergirl and Poison Ivy carrying on the lineage of artists like Gil Elvgren, George Petty and Alberto Vargas. Since then DC Comics has joined in the fun with a run of Bombshells variant covers. The group of sexy sirens has grown to include a revved up Stargirl and rock-a-billy Black Canary who might be belting out Wanda Jackson’s “Fujiyama Mama.” 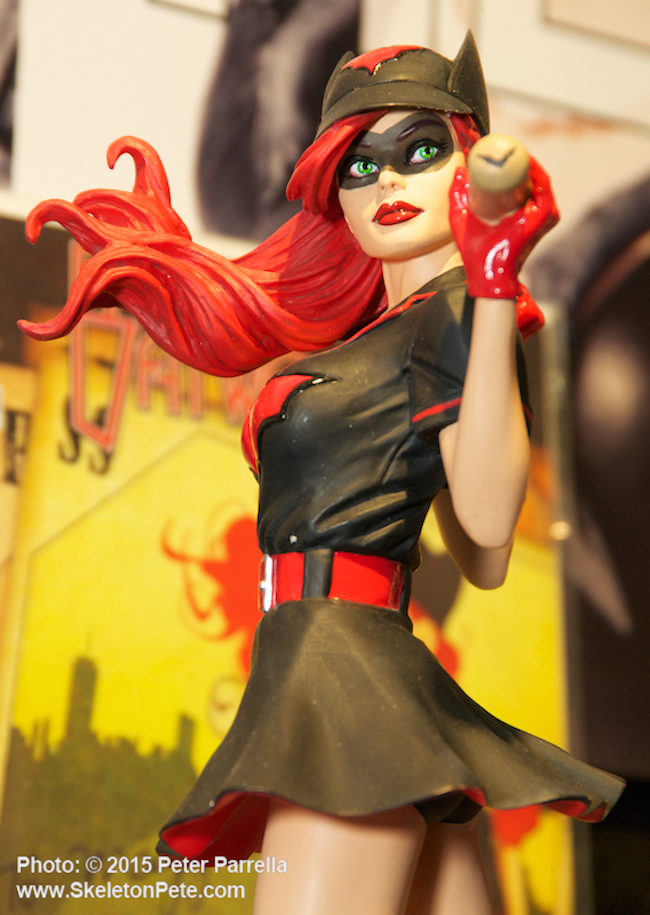 Bat’er Up…
Later this year Batwoman gets to swing for the far wall in a baseball card themed statue taken directly from a DC variant cover, while Lois Lane in paperboy attire will hawk the Daily Planet. Also in waiting is a very sophisticated Catwoman in a very little black dress, and Harley Quinn in a deluxe edition covers a hapless and helpless Joker in crimson smooches.

Wrap Your Troubles in Dreams…
The popular line expands into other merchandising areas with the announcement of branded blankets and robes. A recent press release reports that “Ant Lucia’s classic pin-up style artwork of DC Comics’ super-heroines continues to grace the DC Bombshells Satin Robes from Underboss and blankets from The NorthWest Company! The exclusive Harley Quinn robe features a two-toned red and black coloring with playing card diamonds on the front and a high-spirited Harley holding her trusty pistol on the back. Alternately you might choose to “get comfortable and curl up with your very own DC Comics Bombshell Harley Quinn or Wonder Woman tapestry blanket! Each blanket measures 46″x60″, is made of soft acrylic, and carries vivid detail of everyone’s favorite Queen Clown Harley Quinn or Can-Do Wonder Woman…”

You can find those exclusives on order through the March issue Diamond’s Previews catalog.

Click this link for a revealing look at the genesis of the DC Collectibles Bombshells line.

Wow, I’m still wading through the massive amount of amazing collectibles encountered at the 2011 Toy Fair. While snooping for fantasy character tie-ins I got pretty much stopped dead in my tracks by the Tonner Doll Company’s display of “DC Stars”. The new line includes comic book super heroines Catwoman, Dove, Raven, Black Canary and a stunning Teen Titans Starfire in sizes from 13 to 17 inches. In addition there is a jaw dropping 22 inch version of Wonder Woman to compliment 2010’s 13 inch model.

Tonner is renown for their beautifully rendered limited edition figures. Their licenses include the Harry Potter and Twilight franchises and my favorite Tim Burton’s “Alice in Wonderland” characters. The company also has their own “Sinister Circus” characters with a nice creep factor for the gothically inclined.

Kenny P. and I agreed that we’d love to see Ms. Emilie Autumn and her Bloody Crumpets get the collector doll treatment. Think of the cool accessories – tea cups, rats and candelabra, stilts and some pirate gear for Maggot.