When the lights are shut

Upon the spinning of his head

Too Much Monkey Business…

If over the last couple of years you’ve somehow missed contact with the Fingerlings, WowWee Toys’ uber-cute electronic pets, please rent me a space near the rock you live under. Andy and I first saw them previewed at a New York Play Fair event and immediately knew that they were going to be a huge hit.

Kids and adults alike quickly connected with the playful pastel colored monkeys that could slide over a forefinger or hang upside down by their prehensile tails. Fingerlings’ calm interactive nature and cheerful chirping helped foster a personal connection with youngsters.

Popularity soared and even required legal action to stem the tide of counterfeits that ensued during the 2017 holiday season. The line was bestowed with the Toy of the Year Award by The Toy Association in 2018. Other characters like penguins, pandas, porpoises and purple sloths followed quickly and continues to grow with franchise exclusives and limited editions driving a fanbase of collectors.

A Mr. Hyde Side…
This year, following the old saw that “into each life a little rain must fall,” WowWee has decided to slip a smidgen of the dark side into the formula. Meet the Grimlings, a nice but naughty addition to the Fingerling family. Yes, they’ll still be your friends in the light of day but once the evening shadows creep out from the corners of your room Grimlings take on a completely different demeanor. Following a 360 degree head spin that would make Linda Blair envious the Grimlings’ fangs descend and their eyes glow red. 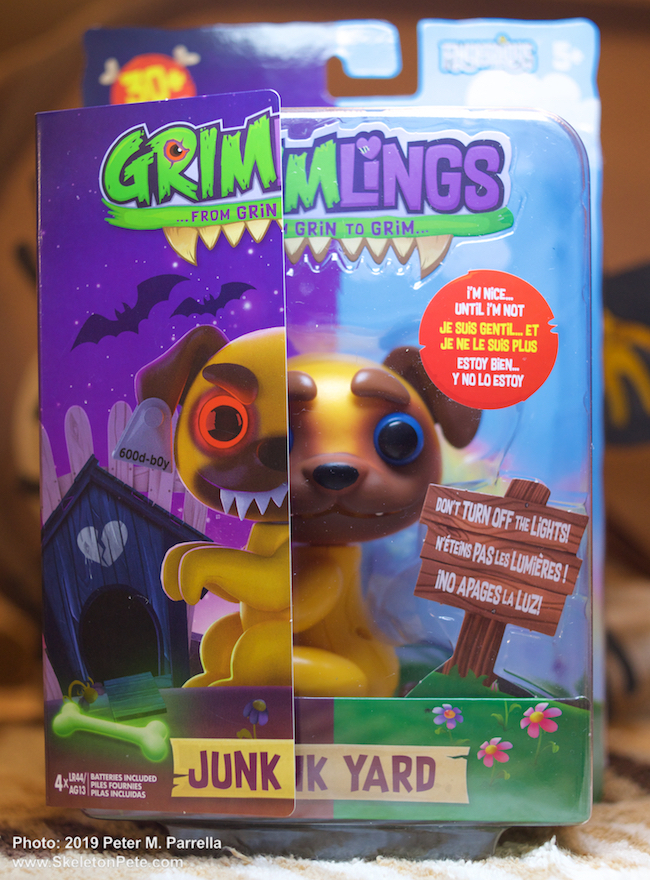 21st Century Schizoid Pup…
We had the opportunity to photograph Junkyard The Dog and had fun learning the toy’s behaviors from panting pup to evil hellhound in the process. Junkyard’s transformation is completed with a reverberant howl more akin to a werewolf than a household pet. It makes me laugh every time I hear it. Don’t fear, Grimlings won’t stay in a rude ‘tude for too long. Shine a little on them – or be a “Grim Whisperer” by blowing in their ear – and all will be well again.

SkeletonPete Says…
Grimlings Series One consists of four characters, my new pal Junkyard the Dog, Scaredy Cat, Evil GiGi the Unicorn, and Hip-Hop the Bunny which is a Walmart Exclusive.

All Grimlings are touch and light sensitive. Even in rude mood they’re not too scary for the lower end of the suggested age range, which is 5 years old. Their unpredictable responses and over 30 sounds will keep play sessions fresh.

At $14.99 SRP each they are extremely well priced for the amount of playtime they will inevitably garner. They’ll also make a great choice to bring as a donation to your local holiday toy drive.