Fangs for the Memories…
Mezco Toyz is harking (or is it Harkering?) back two score years to their gnarly roots with a very special One:12 Collective figure of Orlock, the vampire Count of Friedrich Wilhelm Murnau’s 1922 silent film Nosferatu, A Symphony of Horror.

Before becoming the world renown creators of Living Dead Dolls Mezco Toyz released a small series of action figures called Silent Screamers. Under the business banner of Aztech Toyz the company paid homage to two classic films of the early 20th Century, the aforementioned Nosferatu and the expressionist thriller The Cabinet of Dr. Caligari. (1919).

Graf Orlock was the first of the four characters. He was companioned by a highly stylized rendition his insectivore minion Knock Renfield. Caligari was represented in the collection by the corpulent doctor and his gaunt night stalking henchman Cesare.

The original Silent Screamers came with oodles of extras, setting the quality bar high. The unique blister packs offered historical details, film sprocket framed graphics and package art by Alex Ross. Style appropriate dioramas made a perfect display for each of the figures. So, it’s no surprise Mezco has gone whole (wart)hog on this 20<sup>th</th> Anniversary revisit. The One:12 Collective Nosferatu comes in a metal lunchbox loaded with accessories, including a wooden coffin, lantern, crypt keys, his natty turban, and plenty of plague rats. There’s even a screen printed commemorative T-shirt.

In a Historical Vein…
As a thinly veiled and wholly unauthorized version of Bram Stoker’s 1895 novel Dracula the film Nosferatu has a history riddled with intrigue. Florence Stoker, the author’s widow and heir to the copyright (licensing of which kept her financially afloat) launched a suit against the producers of the movie and won a verdict that included the order to have all prints destroyed worldwide.

The film’s total obliteration was averted by copies squirreled away in private collections which, legalities aside, ultimately proved to be a gift to cinematic history. By the mid 1960’s film buffs and monster kids like myself could actually purchase a version of the by then public domain movie on 8mm film.

For a work that was nearly lost, Nosferatu has enjoyed a protracted artistic journey and earned an iconic place in popular culture. It was remade by director Werner Herzog in 1979, perfectly casting Klaus Kinski as the rabid count. The same year, actor Max Shreck’s rat-fanged make-up was mimicked for the TV version of Stephen King’s Salem’s Lot.

The original film has seen latter day scoring added. Most notably by Peter Steele & Type O Negative. Blue Oyster Cult penned a song detailing the germanic vampire tale for their Spectres album, with the chorus “Only a woman can break his spell. Pure in heart, who will offer herself – to Nosferatu”

My personal favorite riff on the original is director E. Elias Merhige’s (Begotten) Shadow of the Vampire (2000) which fictionalizes/reimagines the film’s production. It features John Malklovich as Murnau and Willem Dafoe as its very suspect lead “actor.”

Adding to this long list the Mezco gang has created an animated promotional video for their collectible that is itself a mini-masterpiece. It’s a labor of love tribute that bolsters their motto “for collectors, by collectors” to be true.

SkeletonPete Says…
[Editor’s Note] As of this posting (July 2020) the first limited edition bundles have sold out, but you can join the waitlist for the next round which is scheduled for November-December 2020. I think this figure a must have for any horror film buff and/or toy collector and will be worth the wait.

For those who would like more historical detail about Nosferatu and the theatrical life of Count Dracula I highly recommend David J. Skal’s still definitive Hollywood Gothic: the Tangled Web of Dracula from Novel to Stage to Screen, as a source book on the subject.

And… yes, I still have 3 of the four original Aztech Silent Screamers in my toy collection. Knock Renfield managed to escape my clutches. Yes, they’re still boxed. I should have bought 2 of each. 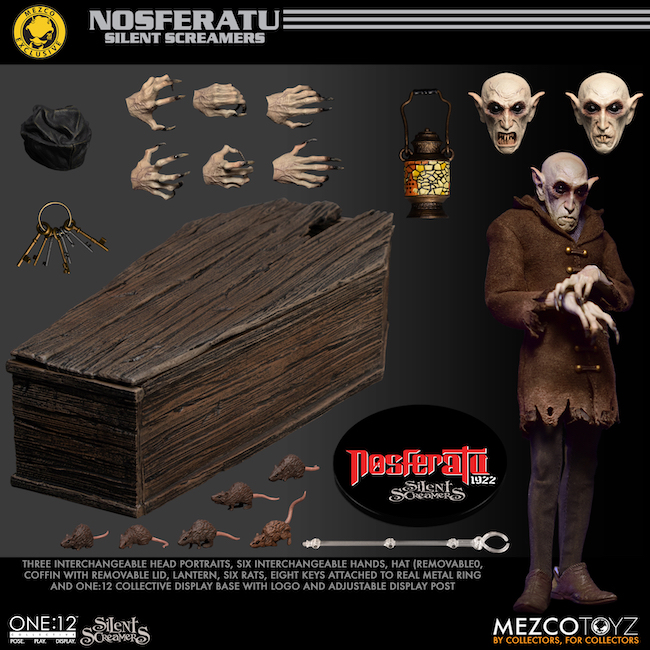