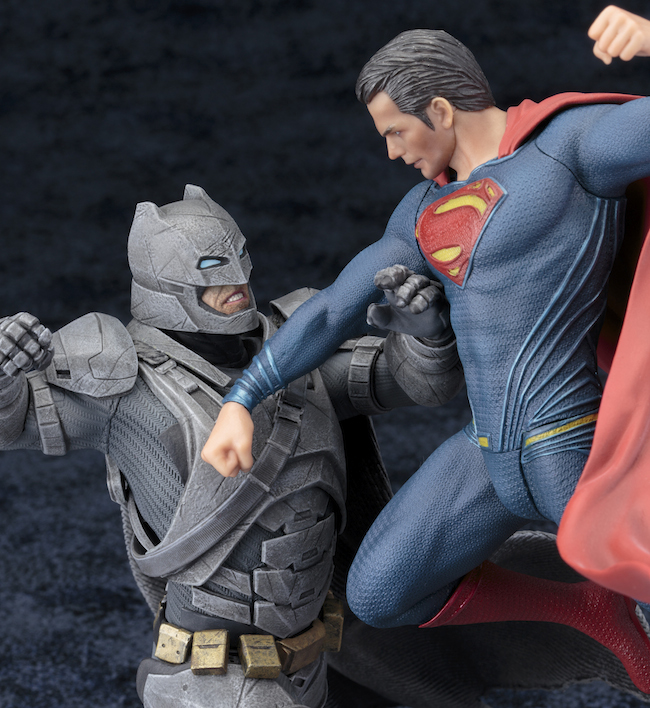 The Toy Industry Association’s 2016 New York Fair is just a month away and things are heating up in Toyland. That includes some interesting “pre-veals” that have recently found their way into the SkeletonPete mailbox.

Punch Brothers…
We just received a communique from collectible figure artisans Kotobukiya unveiling their spectacular Dawn of Justice tableau with DC Comics icons Superman and Batman locked in combat. The ARTFX+ creation, scheduled for May 2016 release, is actually two individual 1/10 scale statues that fit together at the base to form the battle scene.


Koto’s Kilo…
We’ve reported on Kotobukiya’s wonderful line of Star Wars statues in the past, and can now reveal their newest, The Force Awakens‘ Kylo Ren in all his dark glory. Like many of the other ArtFX+ figures Kylo comes with an assortment of swappable parts to emulate your favorite poses from the film.
Oh, You Pretty Things…
In addition to Kotobukiya’s expansive anime offerings the company has a unique line of bishoujo sculpts that portray famous film and comic characters in the guise of Japanese pop culture “pretty girls.” Along with sexy renditions of Star Wars, Marvel and DC properties, they’ve even found a way to glam up Friday the Thirteenth‘s Jason Voorhees and Nightmare on Elm Street‘s Freddy Krueger. While we’re waiting to see the rest of Kotobukiya’s products for 2016, here’s a gallery of their goodies to admire.