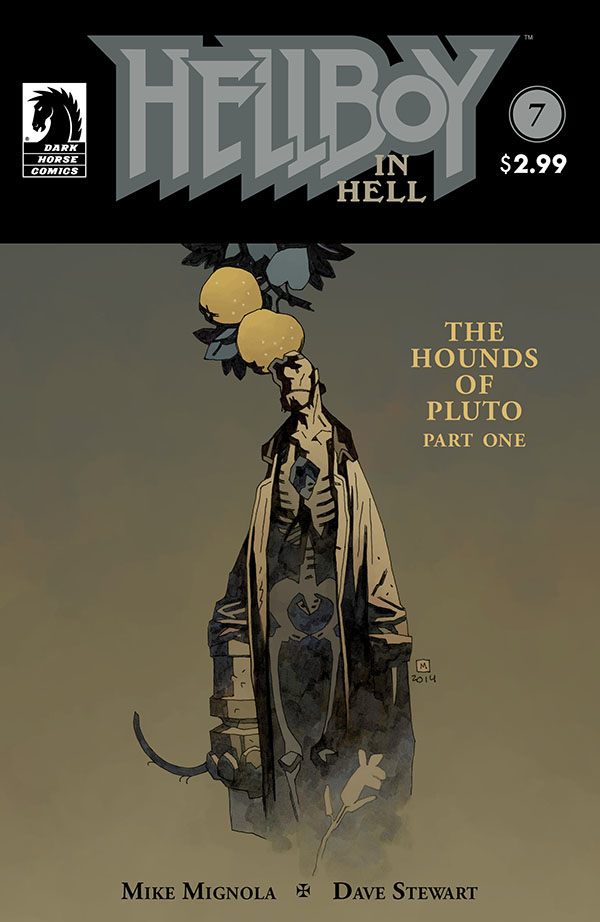 I Took a Dog’s Paw, A Hog Jaw, and Tied ’em in a Knot…
There is no rest for the expired when you happen to be Hellboy. He’s dead. He’s in Hell. He’s all messed up. Yet even in death he’s going to have to face a world of deadly problems, possibly the expunging of his eternal soul thereby becoming a hollow howling haunter of hell. He is not without benefactors but their needs are reciprocal and large.

Written and rendered for the printed page by HellBoy creator Mike Mignola and his trusty wingman, colorist Dave Stewart, issue #7 of Dark Horse Comics’ Hellboy In Hell presents us with the first of the two-part story “The Hounds of Pluto.”

I Took a Black Cat, A Cave Bat, and Threw ’em in a Pot…
Inspiration can come in the strangest forms, and editor Scott Allie informs us that Mignola found his muse for a key story element in a skeletal feline Halloween ornament. That item is elevated to star status on the cover of HBiH #8 (September 2015).

Mignola brews his stories in a cauldron of classic motifs that often suggest the frames of a silent era film. Caligariesque street-scapes, post grave grudges, glitchy golems and Shakespearean incantations are all part of the mix here. To heighten the effect, colorist Stewart juxtaposes the hard lines and stark tones of Hell’s very active memento mori against subtle watercolor washes depicting Hellboy’s verdant reveries of Alice and the rebirth of existence in the wake of what was once England.

What role must HB play in the rise of the new Albion? Not even those intrinsically involved know for sure, but you can begin your own deductions when this issue hits the bookstore shelves. 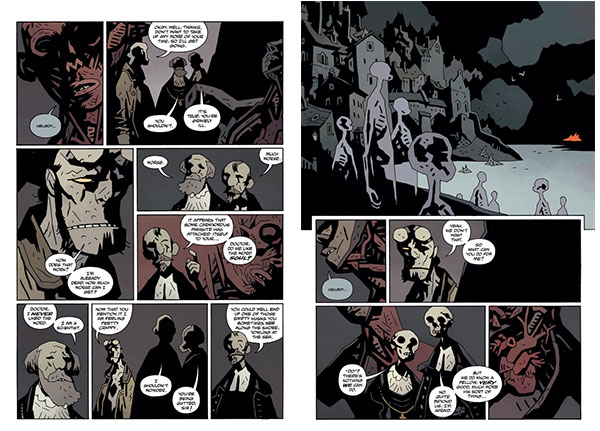 SkeletonPete Says…
If you want to catch up with just how our hero got to this place in time and space before HBiH #7 is released, check out Dark Horse’s The Storm and The Fury: HellBoy Volume 12 compilation which pulls together the two story arcs you need under one cover.

BTW, if you’re wondering where my lyrical paragraph headers come from give Johnny Otis‘s “Castin’ My Spell” a listen. I particularly dig the version done by Johnny Kid and the Pirates in 1964.