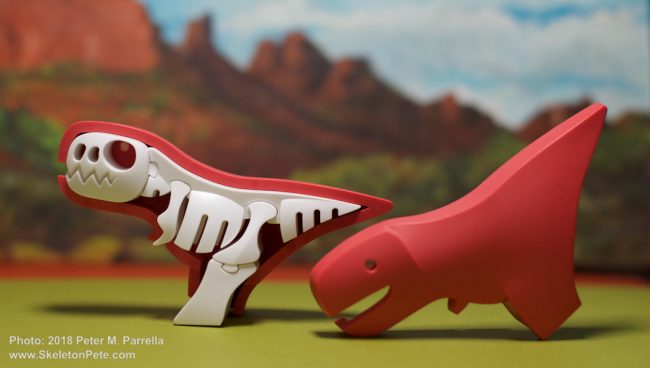 Better By Half…
I first saw the wonderful HalfToys creatures at The Toy Association‘s New York ToyFair back in 2017 and instantly fell in love with the look as well as the concept. So I was especially pleased when early in October this year LearnPlay (the exclusive United States distributor of HalfToys) reached out to solicit the first wave of the product line.

Halftoys Dinosaurs line currently presents six of the most well known saurians molded in plastic with a streamlined mellow countenance. Each has a special surprise inside. The creatures can be split in half to reveal their skeletal structure. That removable skeleton is further enhanced by being divided into puzzle like sections. Aimed at ages 3+ the toys make for good gross – to – fine motor skills training. The two halves of the toys lock together with a satisfying magnetic snap. The outer shell and skeleton can be played with separately.

The toys’ minimalist design and single matte color of their molded “skin” lends itself to customization. We suggest finding an easily removable art product so that your child can change designs at will with a minimum of scrubbing. A good place to start would be Crayola’s line of washable kid’s paints.

The Box Rocks…
Andy and I don’t normally obsess about packaging but we are impressed with the lovely design of the HalfToys boxes. Attention to clean lines and simple but effective details, like embossing, spot varnishing, and stickers corresponding to the figure inside give the toys a high end first impression and a very classy feel as a gift.

Into the Fold…
Normally I build my own backdrops to photograph toys, but in this case each HalfToy includes a portion of their “world.” These origami style constructs, printed on card stock, give your toys an appropriate playground when completed. The T-Rex came with a tree, a rock, some terra firma terracing, and even a Flintstones style meaty bone to placate his carnivorous appetite. They also offer an additional level of creative value to the toys. That said, please note that youngsters will need an assist in the building of these dioramas.

Parents with crafting skills will find the task rewarding and not overly taxing. The pieces are well perforated for removal from the backing cards. Slots and scoring are accurate even for the finer connections. The less crafty may have to put on their “patient parent pants” and follow the wordless instructions which offer an order from simplest to hardest task. There is no gluing involved, and tape would be cheating. Take your time, let your kids watch you fail a little bit. Maybe even stretch the completion of the diorama pieces over a couple of sessions.

Worlds Beyond…
The Halftoys Dinos currently available are  Tricera, T-Rex, Diplo, Ankylo, Stego and Para. Please hit their website for a look at the complete line, and some fun animations.

The HalfToy  biosphere will soon expand with the addition of forest, aquatic animals. Expect a spring 2019 release.  A selection of mythical creatures is also in the company’s long range sights. We glimpsed a streamlined design for a club wielding Cyclops and mighty Minotaur amidst the prototypes shown at The Toy Association’s Toy Fair. The majestic Griffin will be a wonderful add to the collection.

SkeletonPete Says…
Dinosaurs and skeletons, kind of a no-brainer for attention around here, but HalfToys/LearnPlay go the extra mile with a really well thought out and beautifully produced set of toys. Which is why we can whole heartedly recommend them.

The T-Rex diorama photos represent my set-ups of the production version of the toy taken just this week. The far background is a painting I did of a Sedona, Arizona landscape several decades ago. I thought the color palettes matched well.