Diamond Select Toys just unleashed a sweet treat for your Halloween bag in the form of an animated video featuring their line of Universal Monsters figures. Created by Alex Kropinak, the man behind the madness of the Marvel “What The …..?” series, the short follows a trio of Halloween candy hunters to some surprising doorways. In just over a minute we get a slew of cute vignettes of which I especially love the Metaluna Mutant conjuring up a giant candy corn on the old interocitor. 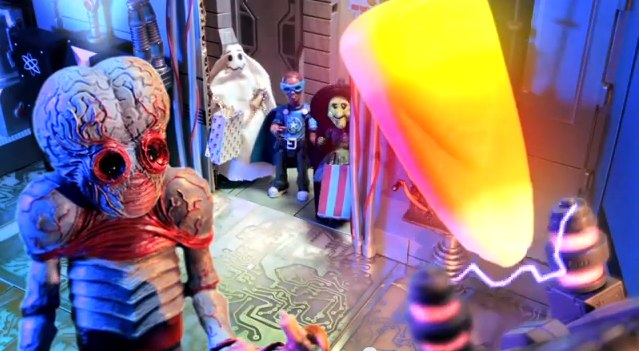 Scripted by Kropinak and DST Marketing Supervisor Zach Oat, the film nicely displays the expanded articulation of DST’s newest additions to the line, Son of Frankenstein and a beautifully revamped Creature from the Black Lagoon. It also affords a cameo appearance to their first original concept Van Helsing character. 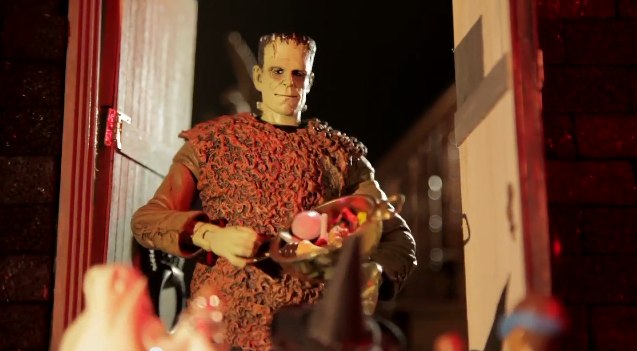 SkeletonPete Says…
Thanks to the Diamond Select gang for this excellent surprise. Having spent a healthy chunk of my early teen years creating backyard “jungle” adventures using a collection of 12 inch G.I. Joes, I’m always appreciative of a nice piece of stop motion animation like this one. The miniature sets are an inspiration for us toy photographers and Kropinak utilizes a touch of CGI for the atmospheric effects. This truly makes me pine for a proper animated version of Ray Bradbury’s The Halloween Tree.

Word is Diamond Select will continue it’s Universal Monster line next year. A super articulated Wolfman would be awesome, but I’d be just as happy to see them do something left-of-center like a Henry Hull Werewolf of London. I’m also really curious to see what their next original creation will be.


Additionally Diamond Select will kick off their The Nightmare Before Christmas Mini-Mates series via shops participating in Halloween ComicFest, with a great Jack Skellington figure that was on display at New York Comic Con a week ago.

Monsters of all kinds were certainly in the mix at The Toy Association’s 109th Industry Conference, simply known as Toy Fair. Always of particular interest to collectors are upcoming licensed figures of their favorite horror characters like the Universal Monsters series from Diamond Select I reported on earlier.

This year toy manufacturer Mezco, who are well known for their “Living Dead Dolls”, are adding classic Universal Films Monsters to their line. As one would expect the company will offer the countenances of The Frankenstein Monster and Count Dracula, rendered in the dead dolls cherubic style. Those are slated for September 2013.

In addition Mezco has shown prototypes for a quirky, set of figures sculpted in an expressionist or Caligari-esque mode that we haven’t seen before. Frankenstein, The Mummy and The Creature From The Black Lagoon are presented in skewed proportions that bring out a menace previously unseen in action figures. I really like this concept and particularly love the gangly look of The Creature; think I might have to own this one even with the limited display space I have. Mezco also has a “Big Frankie” style monster, they’re calling the Mega Deluxe Frankenstein, set for November 2012. This 2 foot bruiser has a dead pan demeanor I really like. “Black and White” variants were on display for all the figures.


Also at Toy Fair 2012 were Titan Merchandise’s newest 3/4 busts, of Hammer horror films characters. Represented are Christopher Lee in his most famous role as Count Dracula, Ingrid Pitt as the sanguinely rejuvenated Elizabeth Bathory (Countess Dracula, 1971) and Peter Cushing as the intrepid Dr. Abraham Van Helsing (Dracula / aka Horror of Dracula, 1958.) These missed their originally listed Fall 2011 release dates, and are now scheduled to hit the shelves in mid April 2012, right around even scarier Income Tax time. They are limited to editions of 1000.