What It Is…
New York City’s Highline Ballroom was the site of a grand music summit on July 28, 2011. The venue was packed to the rafters with fans, friends and industry folk who came out to see a creme of the crop group of session musicians that for the most part comprise The Rolling Stones touring band. Ostensibly brainstormed as a night to feature long time Stones cohort saxophonist Bobby Keys, the group became Band 2 (dubbed for the number on their rehearsal room) when Keys preferred to shine the spotlight in a more communal fashion. If you’ve turned on the radio in the last 40 years you’ve undoubtedly heard the Texas born Keys. His saxophone solos grace “Brown Sugar”, Dion’s “The Wanderer”, Elton & Lennon’s “Whatever Gets You Through The Night”, he was a Mad Dog for Joe Cocker and a “Friend” of Delaney and Bonnie. He first met The Stones during their 1964 tour of the U.S. and later joined the band during sessions for what became the “Let It Bleed” album. He shares a birthday with Keith Richards and also shared some now legendary carousing, including being “exiled” in France, in the basement of Villa Nellcote, during the summer of 1971.

After an introduction by longtime NY rock disc jockey Ken Dashow, the band slid into the show with a jazzy “(I Can’t Get No) Satisfaction”, cast in the style presented on Tim Ries’s “The Rolling Stones Project” recordings. Nearly every tune required some change of personnel and multi-instrumentalist Ries acted as defacto stage manager and band leader for the evening. The show progressed “revue” like with players entering and leaving the stage as song arrangements required. Working their way around a stage strewn with innumerable instruments, microphones, music stands, stomp boxes and cables the group took turns as soloists, duos and trios, voices with simple horn accompaniment and/or acoustic guitar through full on rockin’ ensemble.

Can’t You Hear Them Rockin’

Bobby Keys took the stage joking that in 30 years on the road he’d never been given a microphone to speak into and claimed he “might take it home”. Relating a story of his youth that correlated hearing King Curtis and “leaving” school Keys led the band through a really sweet version of Curtis’s 1962 tune “Soul Serenade”. One truly timeless melody. I dig Willie Mitchell’s version also. Later in the evening he presented a loose version of Booker T. & The MG’s instro “Bootleg”. Things really got rockin’ when the audience caught a hint of the slippery opening riff to “Can’t You Hear Me Knockin’” and with the full band on stage the tune took on barnburner status. Keys wowed everyone with a note perfect run through his classic solo over the latin influenced coda.

The show made a couple detours from The Stones catalog. The Beatles were referenced twice with Lisa Fischer singing “Come Together” in similar fashion to Rosetta Hightower’s version and Fab Faux Bassist Will Lee doing a Stax inflected “She’s A Woman”; one of my favorites of the evening. Ries presented an original in progress with daughter Chelsea at the microphone. Lisa’s, Ann Wilson style vocal on Led Zep’s “Rock N Roll” closed the first set with a bang.

There were many highlights during the night. Bernard Fowler sang lead on that most beautiful and heartfelt of Stones songs, “Wild Horses”, with Blondie Chaplin harmonizing. Always makes me think of Graham Parsons. Blondie opened the second set with a scratchy reggae tune and sang a gorgeous rendition of the evergreen “Smile”. Tim added some great accompaniment on soprano sax. That tune began life as a melody written by another chap named Chaplin (Charlie) in the 1930’s and with added lyrics was made famous by Nat King Cole in the early 1950’s. The unquestionable grand slam of the show was “Gimme Shelter” with Lisa’s spectacular vocal and Sugar Blue’s haunting harp playing. The original vocalist on this foreboding juggernaut was Merry Clayton, who set the bar super high for all who followed. Lisa not only met that “threatening storm” head-on but blew it back a few clicks. The encore sent everyone home on an up note with the audience spontaneously joining in on the chorus as Bernard sang “Ruby Tuesday”.

Wish List
Considering the talented horn section and the Stones-centric spin of the show it was surprising to find tunes like “Brown Sugar”, “Live With Me”, “Bitch”, “Happy” and maybe even the obscure but great “I Got The Blues” missing from the presentation. I would have also been glad to hear some more tunes specifically featuring Keys at center stage. Maybe next time, which I truly hope there will be.

SkeletonPete Says:
This jammy stage session was a nice peak at the The Stones mega-talented backline in action on their own. It had the relaxed mood of sitting in your living room while a slew of musician friends play their favorite tunes. Though the audience might have been hoping for a “Keef” sighting, the overall presentation did not suffer without it. Though essentially famous as a backing band, each member could easily star in their own right (and often do) and that was clearly the point of this showcase. 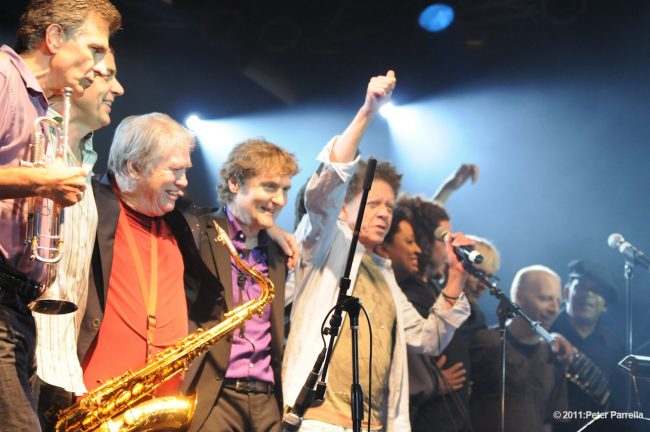 Click any image to enlarge and launch lightbox gallery