Chillin’…
Writers Mike Mignola and Chris Robeson in collaboration with artist Stephen Green and colorist Dave Stewart, bring their most famous creation to an arctic setting. There’s plenty of action and intrigue blended with the deadpan humor we’ve come to expect from our favorite scion of Hades. Fans of 1950’s science fiction will find Hellboy and the B.P.R.D. 1954: Black Sun an absolute bulls-eye. Issue one is filled with overtones of the John W. Campbell novella “Who Goes There?,” most notably filmed as The Thing from Another World in the 1950’s by Howard Hawks and in the 1980’s by John Carpenter simply as The Thing.

Black Sun issue 1 introduces us to a new B.P.R.D. affiliate, the young cryptozoologist Woodrow Farrier. The character seems named with a bit of a nudge and a wink, as a farrier is a horse shoeing specialist. By the issues’ end the adventure expands beyond a Yeti hunt into unexpected territory. 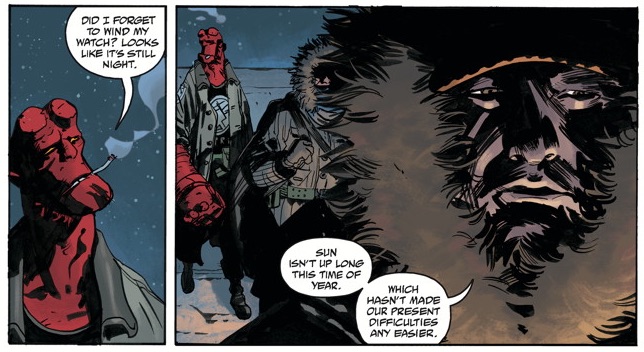 Skeletonpete Says…
Hmm, as a speculative setting for a third Hellboy movie this might afford director Guillermo Del Toro a gateway to the frosty Mountains of Madness after all .

New York City has so many wonderful art and cultural institutions of international note that, even as a life long New Yorker, it is difficult to see beyond the “majors”. MOMA, The MET, Natural History, Guggenheim and my Brooklyn Museum all vie in a very high profile way for your attention, membership and donations. Every once in a while through some serendipity you get introduced to a hidden gem in that cultural landscape and wonder “how did this escape me” for so long. My recent visit to the Nicholas Roerich Museum was just such a case.

Ascending Mount Analogue
I am slightly embarrassed to admit that my first introduction to the personage of Nicholas Roerich was only a few weeks back and sparked in a very unexpected way. I’ve recently started to reread the works of writer H. P. Lovecraft; stories I had not visited since I was a teenager. Lovecraft is the horror genre writer whose Cthulhu & Old Ones mythos is intertwined through many of his short stories. I read the “Case of Charles Dexter Ward” with great enthusiasm; “The Colour Out Of Space” which was the inspiration for the latter day Boris Karloff film “Die, Monster, Die” that I saw on my 12th birthday. I next settled on digesting the novella length “At The Mountains of Madness”, a story which recently failed to be green-lighted by both Warner Brothers and Universal Pictures for production under Guillermo Del Toro and James Cameron.

Along with the cosmic creatures at the heart of Lovecraft’s mythology there are serial allusions to fictional characters and texts such as the “mad arab” Abdul Alhazred and the evil tome called The Necronimicon. So when the narrator of ATMoM mentions the Antarctic landscapes remind him of the paintings of Roerich I believed the artist to be an equally fictional character of Lovecraft’s design. Days later a bit of curiosity and a quick hop onto Wikipedia proved me wrong. I was thrilled to learn that a short subway ride to uptown Manhattan would put me face to face with a large sampling of his works at The Roerich Museum, a lovely townhouse setting near Riverside Drive.

Pax Cultura
Roerich was a prodigious painter, a stage set and costume designer, a writer and scientist. He was also an advocate for the sanctity of the cultural arts throughout the world. The “peace through culture” symbol of three red dots set in a circle has come to be adopted as the “Red Cross” banner of the arts and in the 1930’s came to represent the proposed Roerich Pact. The Pact, a set of guidelines formulated to foster the preservation of cultural heritage over military necessity has been ratified by many countries over several decades, though not universally accepted at this time. In order to promote the expansion of these values Roerich was inevitably embroiled in the world of politics and to this day two distinct camps view him as either a forward thinking aesthete or a mystical mountebank.

SkeletonPete Says…
I will leave you to do your own research on the life of Nicholas Roerich. There is plenty to be gleaned online and many books both by and about him available. While his visions of Alpinism are what initiated my serendipitous discovery of his work, it is his pantheistic symbolist pieces I find most interesting. What I will stress is the beauty of the painted works outside their political times and the impossibility of experiencing their depth anything but first hand. There are several nicely illustrated books of his art but what the page renders flat and cartoon like I found to be imbued with a vibrancy of color beyond what I thought could be achieved in tempera paint. “Pink Mountains”, “Burning The Dark”, “Elijah, the Prophet” and “Saint Sophia, the Almighty Wisdom”, all on view at the museum, are particularly stunning in their luminance. A sweet surprise of seeing the original “Glory to the Hero” is that its cloister arches are actually incorporated into its wooden frame.

Posthumous thanks to Mr. Howard Phillips Lovecraft for this enlightenment. Hope this posting sparks your interest as well.

Addendum: Sept. 5. 2011
Thanks to David Haden for historical context on the Roerich and Lovecraft connection in his comment below. His insights into the arcana of HPL can be gleaned in several books he’s written on the subject. They can be found here, in physical and ethereal (eReader) formats.