Didn’t It Rain…
It never stopped raining over Lincoln Center’s Damrosch Park, only came down harder as the evening progressed, but an impressively large crowd of soul music enthusiasts attending the final show of the 2011 Out Of Doors concert series would not be deterred by the record breaking deluge. What they received for their stalwartness was a night of superlative performances and a historical sense of the music that they love. Sponsored by Toyota, the 28th Annual American Roots Music Festival held in Lincoln Center’s bandshell offered four groups; each performing their unique slice of the soul and blues genre.

Opening act Big Funky Sam, fronted by Trombonist Sam Williams (Dirty Dozen Brass Band), warmed up the audience with grooves of their New Orleans hometown also dipping into some Sly & The Family Stone style funk and even a snippet of Gnarls Barkley’s “Crazy” to keep it current. I think the great set by BFS convinced the tentative crowd that this would be a night worth weathering. The North Mississippi Allstars’ Luther and Cody Dickinson, having paid tribute to their father Jim during a panel discussion earlier in the day, served up a set of electrified “hill country” blues, and The Barkays Revue featuring founder member James Alexander on bass guitar gave a pocket history of 60’s and 70’s soul. They performed everything from “Sweet Soul Music” to “Theme From Shaft” and their own eternal crowd pleaser “Soulfinger”.

I’ll be featuring festival panel discussion details and more information on and photos of the opening acts as the week progresses. Keep an eye out.

Dedicated, The “5” Royales Tribute
The festival headliner was Steve Cropper, the guitarist of Stax Records house band Booker T. & The MG’s, that you know from his stinging “Soul Man” notes (“Play It Steve”) and his sweet melodic slides on Otis Redding’s “Dock of the Bay”. Cropper debuted music from his new release “Dedicated”, a look at the music of the pioneering “5” Royales and guitarist Lowman “Pete” Pauling. “You are truly dedicated” he told the crowd huddled under umbrellas, ponchos, slickers and plastic bags. Cropper was surrounded by a stellar stage cast including bassist David Hood, drummer Anton Fig and producer Jon Tiven on guitar and saxophone. Tiven co-produced and co-wrote much of the music on the Cropper and Felix Cavaliere album “Nudge It Up A Notch” from 2008. Aside from Fig, this was a totally different line-up from the “Music of Stax Records” show covered here recently. They kicked off the set by launching into a monster version of “Green Onions” with Leon Pendarvis drivin’ the Hammond B3 that quickly lit any dampened spirits. As the performance built Cropper and band made every drop of rain the audience had sponged up worth the experience.

Singers Ellis Hooks, Dylan LeBlanc, with special guests Bettye Lavette and Maxine Brown took turns at center stage singing classic numbers like “(In The) Midnight Hour”, “99 and a Half Won’t Do”, “(Sitting on the) Dock of the Bay”, along with selections from the “5” Royales tribute. Bettye came on stage surprised to see all the “crazy people” still out in the rain to sing “Say It”. “Give me a chance here” she said “I learned these songs when I was about 2 years old.” She was joined for a call and response version of “Don’t Be Ashamed” by Ellis. Dylan was given a healthy hunk of the middle of the set, getting a chance to sing the “5” Royales torch song “Someone Made You For Me”, gospel inspired “Come On and Save Me”, as well as “Dock of the Bay”. Dylan, just turned 21, grew up around the Muscle Shoals music scene, spending time at FAME studios where his Dad had a publishing deal and it’s clear that he has an innate intuition for the style.

It was a thrilling moment to hear Maxine hit the a-cappella opening line of “Dedicated To the One I Love” as she entered the stage. The song is given a quirky spin on the “Dedicated” album behind Lucinda Williams’ drawl, while Maxine rendered it in sparking girl group fashion. Ellis returned to the stage stomping through the puddles at the edge and intoning “let it rain, let it rain”, like a gospel preacher. He closed out the evening with the Royale’s “30 Second Lover” and Eddie Floyd’s “Knock On Wood”. The band mercifully didn’t make the sopping crowd wait for the encore with Ellis getting his wish to sing “Soul Man” with Cropper. Steve exited with a wry quip to the audience as they dispersed. “I prayed for good weather, looks like I got it”, and it truly was fair skies in the hearts of everyone who participated in the gathering.

SkeletonPete Says…
Kudos to festival producer Spike Barkin for putting together such a great line up of acts that gave the audience a taste of the varied flavors of soul music as presented by many of the people who invented it as well as those who have followed in their footsteps. A huge round of applause also needs to go to the Lincoln Center Out Of Doors stage crew who managed to get this show presented to a faithful crowd under the worst of weather conditions. Thank you, all. 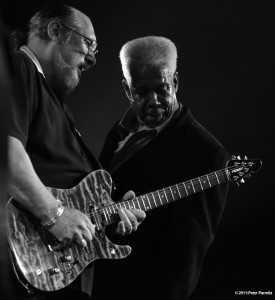