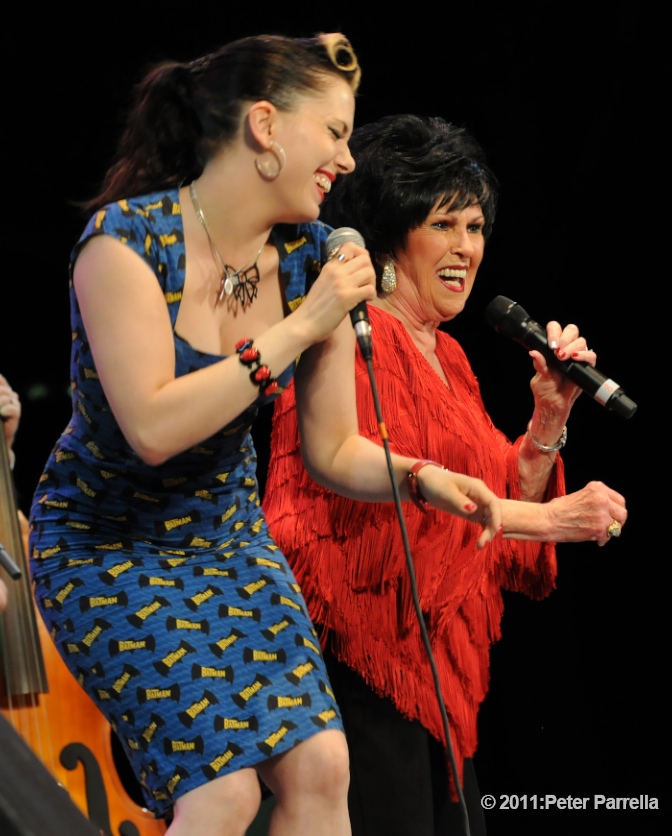 More Encore Photos Below. Follow the links for Full Photo Galleries of Imelda May and Wanda Jackson.

The original rock-a-billy fillie, Wanda Jackson, was joined by the genre’s newest spitfire Imelda May for a Central Park Summer Stage night of 50’s styled riffing and jiving on July 27, 2011. The ladies lit up a perfect mid-summer’s eve in the park and wowed the audience with a host of original and cover tunes formulated to get your pulse a-racing and your feet a-dancing.

Let’s Have A Party

Wanda’s early career mixed country with the then burgeoning rock of Elvis and Gene Vincent and deservedly earned her the title of “Queen of Rock-A-Billy” in the ensuing year’s. Aficionados of the style know her catalog well and you’ll find her tunes being spun along with The Cramps, Eddie Cochran and The Collins Kids wherever DA’s, poodle skirts and pegged pants are found on the dance floor. In 2009 she was honored with induction into the Rock N Roll Hall of Fame. Jackson has flowed through stylistic changes of country, rock-a-billy and southern gospel but she has never “left the building”. Artists like Rosie Flores have championed her in the past and now Mr. Jack White (“a nice young man”) has given the lady’s catalog a healthy injection by producing her most recent album. Aptly titled “The Party Ain’t Over”, a decades later nod to her 1960 radio hit “Let’s Have A Party”, which was the set closer on this show.

I’m thrilled to report Ms. Wanda has kept her pipes in perfect shape and it is a joy to hear her serving up a blue plate special of I – helped – invent – this, four – on – the – floor, stomp. She also kept her red fringe shimmying for the appreciative crowd. Her stories of touring with – and dating – Elvis are priceless. She still keeps the ring he gave her to wear around her neck. Her originals, like “Mean, Mean Man” and “Fujiyama Mama”, penned to fill the gap for female vocals in early rock, match Elvis’s better Sun Records output and rival Gene Vincent’s work for flat out hot-doggin’ fun. Both tunes were in her Central Park set.

Hot Dog, He Got Me Mad

The Hi – Dollars, led by Heath Haynes, backed Wanda marvelously, got a few opening numbers in for themselves to warm up the crowd, and produced some stop-on-a-dime turn around’s with a dose Fender twang, Gretsch sting and banging keyboards; everything cruising along on a bed of pumping stand up bass and drums. The set included two personal favorites, Johnny Kid’s “Shakin’ All Over” and Eddie Cochran’s “Nervous Breakdown”, the latter being the ur-seed for Led Zep’s “Living Lovin’ Maid” and the former sporting a lick that, though covered by every band from here to Timbuktu, never gets old. A run through “Rip It Up” was another highlight for the rock-a-billy centric crowd up near the stage.

Wanda made note of the sad passing of chanteuse Amy Winehouse this week. Lamenting the death of a talent so young and paid tribute with a rendering of Winehouse’s “You Know I’m no Good”. She also dipped into her own country and gospel roots for a few tunes, even slipped in a sweet blue yodel, giving the young audience a nice glimpse of how traditional sounds collided to give birth to Rock.

Darling Buds of (Imelda) May

Petite powerhouse Imelda May’s star has been on the rise internationally since her well publicized stint with Jeff Beck on his Les Paul Tribute Show (Eagle Vision DVD). There she ably emulated the late Mary Ford (Les’s wife), harmonizing with her own meticulously multi-tracked versions of “How High The Moon”, “Bye, Bye Blues”, “Vaya Con Dios”. Similarly her own band includes husband Darrel Higham on guitar. The group is steeped in outre and retro culture. On this night Imelda sported a slinky blue dress emblazoned with the sixties Batman TV show logo, double bass player Al was attired in leopard print shirt and bleached buzz cut, Darrell’s on big fat Gibson & Gretsch hollow bodies – just like Eddie. Imelda resisted the Betty Page bangs so prevalent on the scene for her own signature look; a big blonde curl in her raven hair.

The band’s Dublin Ireland roots come out when Imelda wields a Bodhran and bones beating out a pulse for the audience to clap along to. Along with her own numbers like the popular “Johnny Got A Boom Boom” May peppers the set with tunes like Howlin’ Wolf’s “Poor Boy” and the Northern Soul classic “Tainted Love”, which served as her firey finale number. The group presented a nice tight opening set, only missing one favorite of mine, their take on “Rollin’ and Tumblin’”.

As the audience clearly hoped both ladies took the stage for an un-staged version of Jerry Lee Lewis’s ”Whole Lotta Shakin Goin’ On”. “What key you do this honey?” “I’m following you.” You could see the mutual appreciation unfold as Wanda coached Imelda through the songs sly, sexy, spoken bit. “Now Imelda, my friend Jerry Lee tells me you can shake it just standin’ in one spot. Easy now… yeah, I think you got it”

Rock-A-Billy music will ring throughout the world as long as these ladies have something to do with it. Wanda and Imelda, long may you reign.

SkeletonPete Says: Get Off The Couch!

This free concert was a perfect double bill on a perfect New York summer night and is just one of the many shows offered by The City Parks Foundation and its sponsors. There is plenty more to come from Summerstage throughout the city. Check out their website for details. New Yorkers, time to leave reality TV for your own reality.

Great stuff, Peter. I took some shots with my iPhone, but would have loved to have been where you were with my D700.

[…] for his own exciting blog site and his full on narrative and amazing photos can all be enjoyed HERE.  Be sure to leave some comment love for the hard work.  Also, if you are interested in checking […]