A Song and A Celebration…
2019 is not only notable for the 50th Anniversary of the original Woodstock Music and Arts Festival, but also as the 75th birthday year of Joni Mitchell, the author of that gathering’s famous titular song. So it’s fitting that New York vocalist and pianist Hannah Reimann would choose to mount a feature length stage presentation highlighting Mitchell’s early works.

The two woman performance is being presented as part of a theatrical celebration at Brooklyn’s Irondale Center  called the On Women Festival. It includes the stage productions Grounded and The Franca Rame Project.

Way To Blue…
Both Sides Now: Songs of Joni Mitchell 1966-1974 presents nearly 20 songs from the singer/songwriters’ first six albums – some well known, some deep-catalog. During the show Reimann anchors the tunes historically with a series of concise and enlightening anecdotes that afford the listener insight into the details of Mitchell’s creative life. Reimann also recounts her own story and that the inception of her Mitchell exploration came during a time when she was caring for her father who was suffering from the onset of trauma-related dementia.

As her family responsibilities cut her off from personal work Hannah set out to learn the songs that comprise Mitchell’s 1971 album Blue as a creative respite. In fact Hannah not only gained “comfort and consultation” from her deep dive into Joni’s autobiographical song catalog but ultimately turned her cinematic eye to her own circumstances and directed My Father’s House, A Journey of Love and Memory, a documentary about she and her family’s experiences as caregivers in their father’s last years.

The gravitas of it’s beginnings aside, Both Sides Now is an enjoyable musical excursion thanks to Reimann’s ability to channel Joni’s lilt and conversational but melodic delivery. Guitarist Michele Temple accompanies the singer using a variety of six-strings to cover Mitchell’s often idiosyncratic tunings. Kudos to her for the ease with which she shifts through those alternate chord voicings.

Even those not completely immersed in Mitchell’s work will hear her influence in the songs of her Laurel Canyon companions. It was a creative scene that revolved around the musical matchmaking of Cass Elliot (aka “Mama Cass” of The Mamas and The Papas). It included David Crosby, Graham Nash, Carole King, Stephen Stills, Dave Mason, James Taylor and others. Joni was even the inspiration for “the girl with the flowers in her hair” in Led Zeppelin’s homage to hippiedom, “Going To California.”

Inversely, Joni’s earliest work shows signs of her interest in the music of fellow Canadian Leonard Cohen. It is specifically obvious in the resemblance between “Cactus Tree” and Cohen’s “Suzanne.” Both Mitchell and Cohen share folk music icon Judy Collins as the songstress who helped introduce their work to the public at large.

It’s Life’s Illusions I Recall…
From our current vantage point Mitchell could be tagged as that quintessential flower-child but, Both Sides Now affords us a critical listen to lyrics that reveal she was always an astute reporter of the times. “They won’t give peace a chance, but it was just a dream we had” (“California”) shows a willingness to face the reality that the summer of love was a fleeting moment of hope. Reimann’s commentary points out that even in 1971 Mitchell was ruminating on the inevitably of “being put out to pasture” by the popular music industry in the unvarnished lyrics of “For The Roses.” 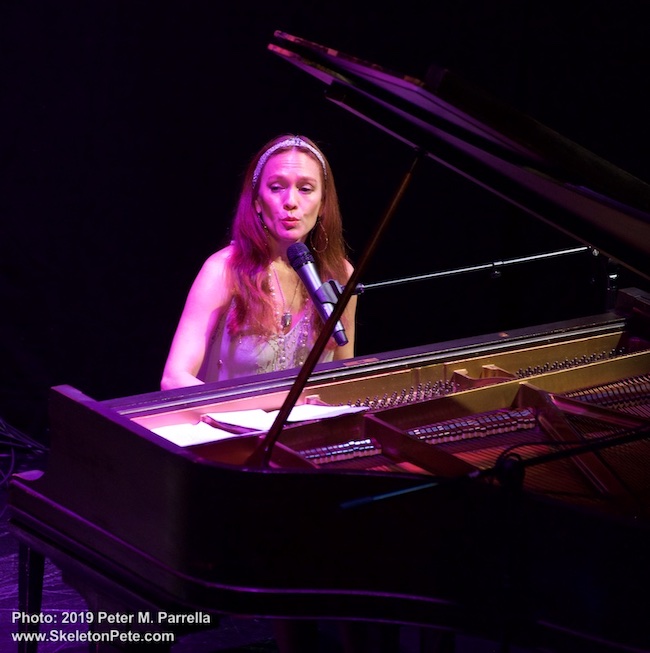 You Don’t Know What You’ve Got ’til It’s Gone…
I am mainly familiar with the staples of Joni Mitchell’s catalog as played on FM Radio. Both Sides Now sent me back to explore the nooks and crannies of the early albums with very rewarding results.

As Reimann noted, some of her recent audiences have been only vaguely aware of the depth of Mitchell’s songbook and one goals of the presentation is to build a wider appreciation. Those only familiar with Crosby, Stills, Nash and Young’s adaptation of “Woodstock” owe it to themselves to hear the original piano driven version, which for me was a highlight of the Irondale show.

SkeletonPete Says…
As either a wonderful retrospective for the Joni devotee or a primer for those who missed the point first time around or were born too late, Both Sides Now should be seen and heard first hand.

Tickets for performances at 9PM on Friday, May 3, and Saturday, May 4 are available from the Irondale Center website.