So it was with great excitement and anticipation that I awaited the arrival the 2015 edition from Alfred A. Knopf publishing, newly illustrated by artist Gris Grimley. Those who have previously encountered Grimly’s illustrations know his style is a perfect match for this Bradbury story. Yet Grimley’s task was no easy one because since it’s first release the book as been associated with the interior art of regular Bradbury collaborator Joseph Mugnaini (1912 – 1992). Mugnaini supplied the illustrations for the likes of Fahrenheit 451, The Martian Chronicles, and The October Country. Two of my favorites appear in Golden Apples of the Sun as embellishments for the short stories “The Sound of Thunder” and “April Witch.”

Mugnaini’s pen and ink drawings for The Halloween Tree are notable for their crosshatch work, texture, and stark areas of black, in many cases giving the effect of scratchboard rendering. Mugnaini adopted this style based on the limitations of the print process. It’s a keep-it-simple method that worked well no matter the quality of paper or print job.

Grim & Grimmer…
While Gris Grimly’s new Halloween Tree art sits firmly in the tradition of fanciful and cartoon like, his use of tints and washes for shading lends his characters a more corporeal sense on the page and his full color wrap around dust jacket imparts an air of pure midwestern hallows eve as described in the book’s opening paragraphs. I believe the late Mr. Bradbury would approve.

As in his graphic novel spin on Washington Irving’s The Legend of Sleepy Hollow Grimly’s use of squashy ochres and greens-going-brown perfectly effect the feeling of autumn. In addition to the dust jacket art, the 9.5 x 6.5 inch hardcover book offers a profuse selection of full and half page illustrations, punctuated by 3 color plates. I’m not sure if Grimly rendered all of the pieces in color, but if so they would make an amazing portfolio. 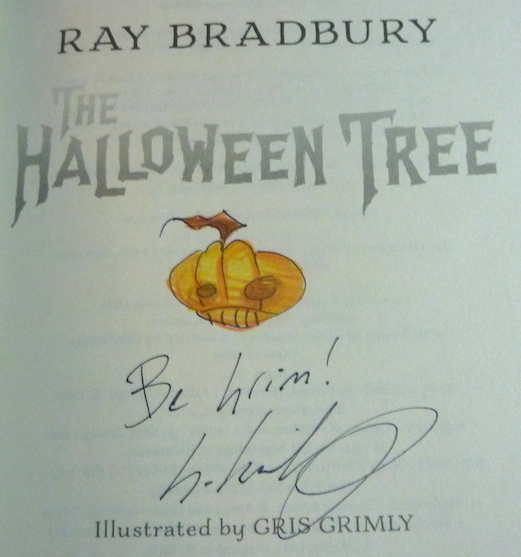 Whereas Mugnaini separated the chapter headers with unique mask drawings, Grimly chooses an array of grimacing, grinning, and giggling jack-o-lanterns to be his dividing images. Copies ordered from his website during September came autographed with the edict “Be Grim,” and a wonderful little color pumpkin sketch on the title page.

You may also want to collect Gris’s other illustrated works including Mary Shelly’s Frankenstein, and a couple of volumes of Edgar Allan Poe tales.