The Head and The Heart…
This Dark Horse graphic novel arrives at an opportune moment, just as I’m in the midst of watching author Neil Gaiman’s Masterclass lecture series and reading Marina Warner’s Once Upon a Time: A Short history of the Fairy Tale (2016).

Gaiman’s class offers his very limited access Bard College writing course in nearly 20 online sessions. So far it’s a revealing peek into the mind and methods of the renown fantasy author, mixed with real world writing advice. Warner’s book gives historical context to how we got from tales orated around the communal fire to the DVD your child wants to see over and over again.

For Snow, Glass, Apples Gaiman uses a creative device he recommends during the coursework. He suggests choosing a classic tale, exploring its various versions, noting its quirks and conundrums, and spinning a refreshed and unexpected narrative all your own.

We’ve seen this strategy applied to Little Red Riding Hood with the big bad wolf telling his side of the story. It is also the core technique of director Akira Kurasawa’s film 101 staple Roshamon (1950), which offers the same event related by several characters.

In Once Upon a Time author Warner relates this seemingly unique method as the historical heart of story transmission. She notes, “Fairytale does not exist in a fixed form or medium. The stories’ interest is not exhausted by repetition, reformation or retelling. Pleasure is gained “…from the endless permutations performed on the nucleus of the tales, it’s DNA as it were.” 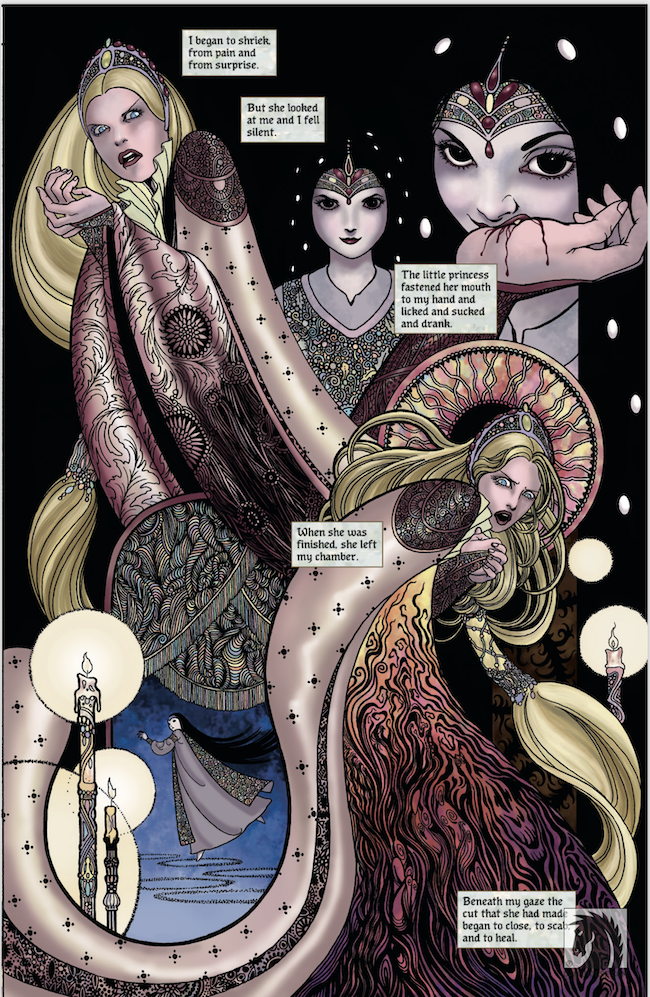 Hi Ho, Uh-Oh…
With Snow, Glass, Apples we hear Snow White’s saga told by “the evil queen,” who reveals a completely different scenario from the one we all grew up on. The results are surprising and thought provoking.

From the opening page monologue (“I do not know what manner of thing she is. None of us do. She killed her mother in the birthing, but that’s never enough to account for it”) we immediately know we’re not in territory aimed at the kiddies. The book’s decidedly overt violence and sexuality is a pointed reminder that most of the stories we now accept as child friendly have had their grisly aspects expurgated over the centuries. The narratives we know best as Walt Disney films were traditionally filled with dismemberments, beheadings, incestuous and cannibalistic doings. 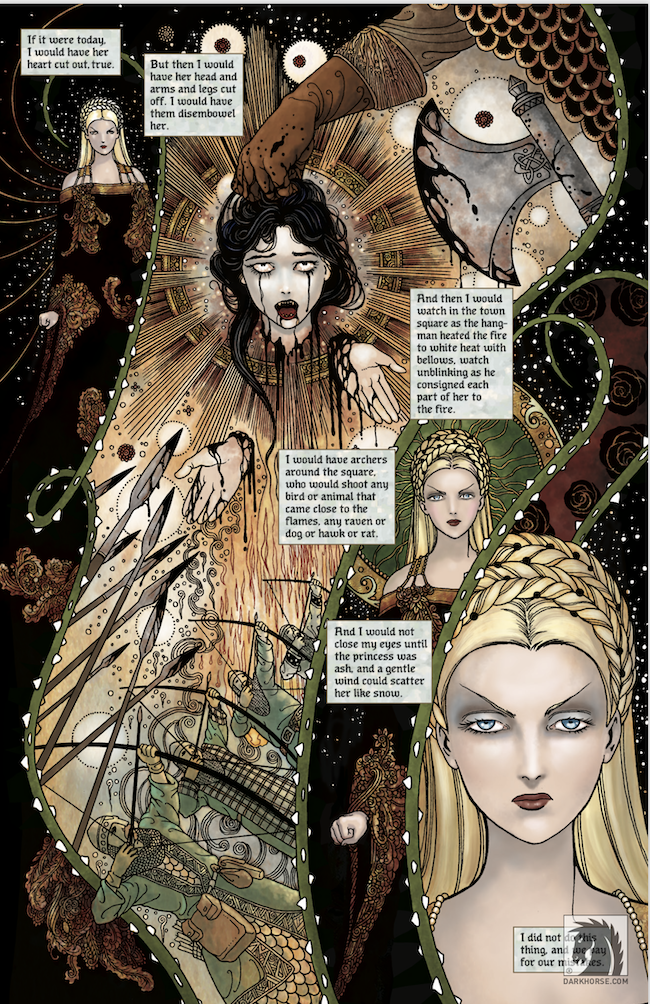 Doran, Doran…
Throughout the book artist Colleen Doran spills her work down the page in creamy swirls and dense patterns, integrating the narrative text boxes in its flows. It is nearly devoid of standard panels save for where they serve a dramatic purpose. Many pages could stand alone as frame-able prints outside the book.

Doran dedicates her work “with respect and gratitude” to artist Harry Clarke, whose early twentieth century illustrations complimented books like Edgar Allan Poe’s Tales of Mystery and Imagination and are still considered the gold standard for pen and ink work.

While the influence of Clarke is clear, in some cases effectively lifted, lovers of Edmund Dulac, Florence Harrison, Arthur Rackham and even Erynd Earl will also appreciate Doran’s designs. This is not to say that she does not have her own style. See her other Gaiman collaboration Troll Bridge and her website for examples.

White Out…
The novel’s first printing hit bookstores and comic shops last week and pre-orders quickly cleared the shelves at Diamond Distributors. A second printing is underway to ensure copies are ready for the 2019 New York Comic Con. Special Editions with an exclusive bookplate signed by Colleen can be ordered via Bud Plant’s online shop.

SkeletonPete Says…
Of course this publication is a must own for Gaiman fans as well as a worthy addition to your graphic novel collection.

Illustrator Doran’s willing nod to her influences also makes Snow, Glass, Apples an excellent enticement to explore the visual history of the fantasy genre. I would highly recommend choosing a few of the well produced and fairly priced offerings from Dover Publications. I’m particularly fond of By A Woman’s Hand: Illustrations of the Golden Age, edited by Mary Carolyn Waldrep. It is filled with beautiful works by the aforementioned Florence Harrison, and 21 others including Jesse Wilcox Smith, Ida Rentoul Outhwaite, Kate Greenaway and Helen Stratton.