Halloween may be over for most of us, but there’s one guy for whom it never ends. Michael Myers. The knife wielding “Boogie Man” of John Carpenter’s seminal horror film just can’t get the Sam Hill outta Samhain.

A recent interview with the director suggests that he will be revisiting the franchise with an eye toward treating the plot line as if none of the innumerable sequels and reboots ever happened. That’s fine by me. AMC’s seasonal marathon of all the films broadcast chronologically proved that none come close to the original.

Mezco’s Myers…
In the meantime we can all imagine a little piece of the action with Mezco Toyz’ One:12 Collective Michael Myers action figure. Displayed at New York Comic Con, it looks like another great addition to the company’s already overflowing selection of licensed characters. Previous releases have been spot-on in their detail and authenticity.

Myers’ “glasses ghost” disguise, sister Judith’s headstone and a light-up Jack O’Lantern are the kinds of extras that continue to make the One:12 products such special display and play pieces. You might even convince your Harley Quinn One:12 figure to play the P. J. Soles role. Just don’t tell her the outcome. 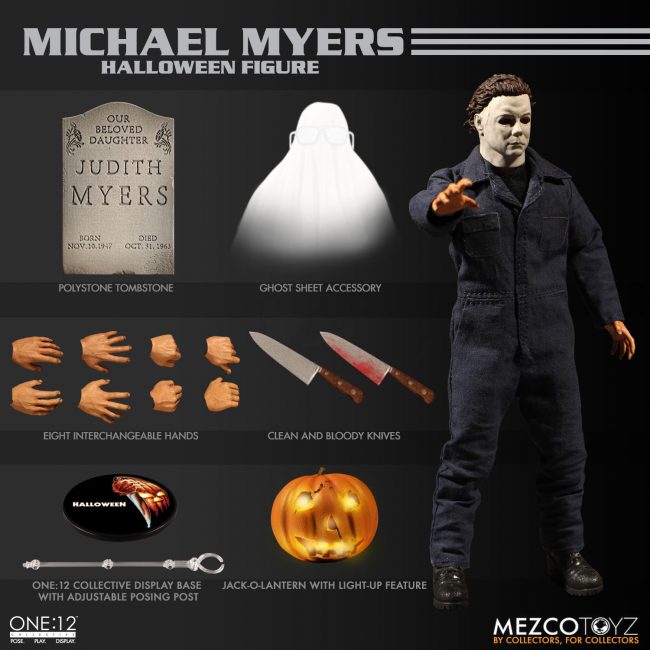 Each One:12 Collective Michael Myers Halloween figure is packaged in a collector friendly box, designed with collectors in mind there are no twist ties for easy in and out of package display.

Preorders are open at the Mezco Website. Expected delivery is July-August 2018.

Nailing a Halloween Homage…
John Carpenter has scored many of his own films and even embarked on a successful concert tour playing cues but the Halloween main theme remains his most memorable piece. Nine Inch Nails’ Trent Reznor and cohort Atticus Ross recently took some time out from their own soundtrack writing to pay homage to that now classic composition.