Skip to the content
Tipping the Scales
Last year at this time we were treated to a look at Mezco Toyz’ early prototype for a Creature from the Black Lagoon Living Dead Doll which quickly went on my must have list. Since then the company has done a design rethink on the figure and gave us another early look during last week’s Pre Toy Fair press event.
The little Creature’s head sculpt still presents a child like look in keeping with his Living Dead Doll siblings but he has lost the Mego style cloth jump suit that represented his scales in the original design. The rethink gives the doll a nicely sculpted fully molded body more in line with Mezco’s stylized lagoon monster released last year. I was lucky enough to score an all white pre-production “test shot” of that guy, seen in the photo below, at Mezco’s vault clearing sale.
Due in July 2015, the “creach” will join the Mezco’s other Universal Monster LDD’s Dracula, Frankenstein’s Monster and his Bride. Preorder the prehistoric gill-boy here.
Damned If I Know…
What’s In A Name? Well, that which we call a rose might wither in the hand of any of one of Mezco’s long running and award winning Living Dead Doll line. New Series 29 will introduce us to the The Nameless Ones. Fresh from interment these 5 children of the damned are garbed in a variety of togs from party dresses to morning and mourning gowns.

Follow the Jaundiced Brick Road…
Along with their original LDD designs, like the new Grim Reaper kissing booth ghoul, Mezco continues to spin up licensed merchandise in some of the most sort after fan franchises. Leafing through their beautifully laid out 2015 product catalog reveals some interesting surprises ahead. In addition to Child’s Play‘s Chucky (design still pending licensor approval) and The Conjuring’s Annabelle, I’m most excited to see the announcement of Wizard of Oz themed dollies joining the Living Dead roster. Dorothy and her companions The Scarecrow, Cowardly Lion and Tin Man dolls are first up, but I’m hoping for an LDD Flying Monkey easing’ on down the road. 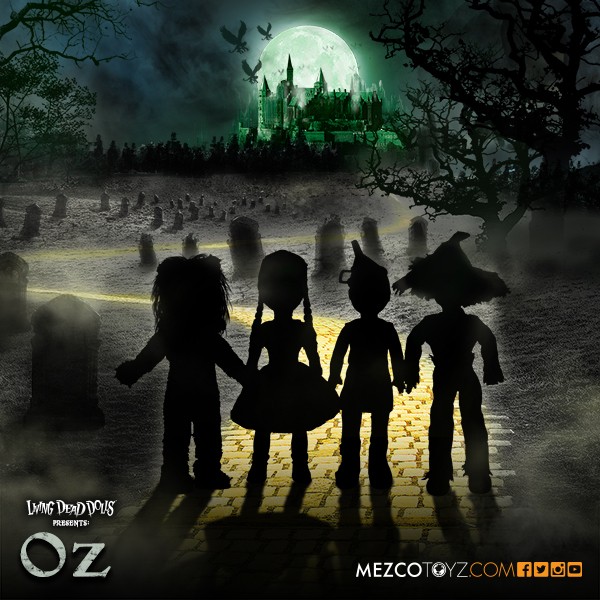 One reply on “50 Shades of GREEN: Mezco LDD “Creach” Gets a Makeover”