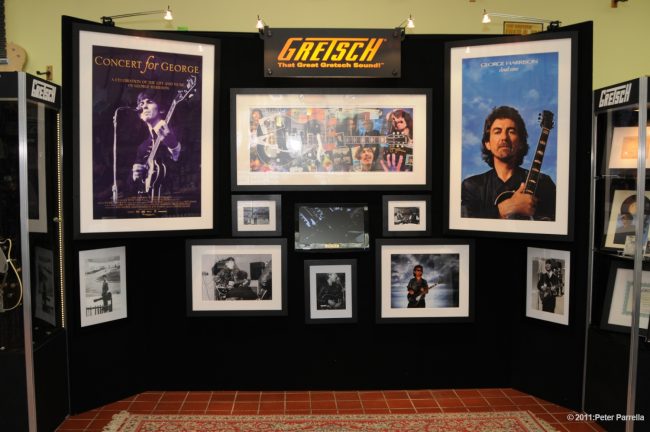 Saturday June 18, 2011
While many weathered the heat to get gander at aquatically adorned Mermaid Parade revelers, the real Brooklyn VIP Party was going down at Bay Ridge’s Street Sounds Music Store, in the shadow of the Verrazano Bridge as we like to say. It was a special day and those in the know packed Rocky Sciano’s family run business to take in the beautiful and voluptuous curves of those American designed classics – Gretsch Guitars. You may know Gretsch instruments as the Rock-A-Billy wreckers painted up in delicious Hot Rod colors, or maybe the country picker’s choice in the hands of Chet Atkins, or maybe the hell’s bells ringing red double cutaway Jet Firebird of AC/DC’s Malcolm Young . “Who’s Next”? “Quadrophenia”? – all Pete Townshend’s 6120, gifted to him by Joe Walsh. Django – Gretsch. Eddie Cochran – Gretsch. Got the point?

The Gretsch family company started its life in Brooklyn NYC in 1883 making banjos and drums for marching bands. They initiated their historic line of guitars in 1954. For this special event Fred Gretsch III and Product Specialist Joe Carducci paid a visit to original home turf bringing along California calendar girl Kim Falcon and top-notch picker Paul Pigat, AKA Cousin Harley. Of course the afternoon was all about the gear; the star item being the prototype of Gretsch’s 1957 Duo Jet George Harrison replica, reproduced down to the rust on the Bigsby vibrato spring. With only 60 of these puppies being produced worldwide, this Harrison family authorized gem was a thrill to ogle slowly revolving in its display case. Along with the Harrison collectors item Street Sounds showed off walls hung with beautiful examples of the expansive Gretsch line and District Product Manager David Waters was on hand throughout the afternoon to offer attendees help and information on specific models.

As part of the festivities, Mssrs. Gretsch and Carducci presented “The Fred and Joe Show” highlighting the company’s history and key artists. It was augmented to include information about the convoluted journey of George’s Duo Jet. It’s a great story, you can read it here. Raffle tickets were chosen by Ms. Falcon (with a little help from Rocky’s mom). Prizes included heaps of Gretsch merch like T-shirts, playing cards, Zippo Lighters and bolo ties. In addition, two lucky participants won killer Gretsch guitars. Paul Pigat played some smokin’ rock-a-billy, a smooth take on Hoagy Carmichael’s “Stardust”, and taught a compact lesson on the art of Travis picking. Up and coming group Foxy Studs (Joe on guitar, Christina on drums, Tammie singing and Elia on Bass) gave the audience a look at and listen to the future of Gretsch guitar and drum players. After the raffles and presentation Fred and Kim spent time meeting fans and signing autographs on calendars, posters and even a few guitars. 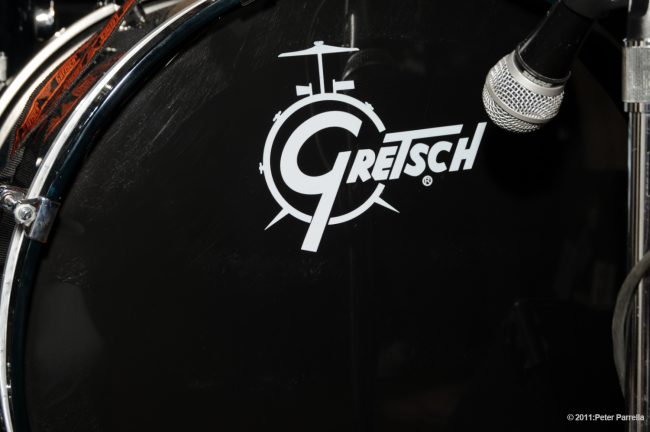 Whoa! Haven’t seen you since the Fort Hamilton High School “Battle of the Bands” in 1972

The event was like old home week for local musicians and brought out players young and umm…seasoned from the surrounding neighborhoods. It is just so cool that so many of us have kept the faith and kept playing. There were some Prodigal Children, a Rockingham or two, John “The Cat” Gatto from – genuflect now – The Good Rats, even a couple of members of Dance Half Done. Modern Drummer editor Billy Amendola was on hand as was Piercing Metal’s main mensch Ken Pierce.

The special day continued into evening with a walking tour at the original factory site – 60 Broadway in Williamsburg. Apparently, the pioneering Gretsch family beat the hipster invasion to the punch by over 100 years!

P.S.
The Frosted Pink Cupcake Lollipops were mind blowing! – no that’s not a psychedelic tribute band.

The photos below tell the story of a wonderful time had by all. Click any image to launch the gallery. (All photos copyright 2011, Peter Parrella)

What a great day! Wish I could have been there! …this article gives me a good taste of it!!
all the bass –
Cricket

[…] check out Skeleton Pete’s incredible coverage just click this LINK to go to his blogsite. You can thank me later. Also be sure to look into the relevant links below […]