“When the snows fall and the white wind blows, the lone wolf dies but the pack survives.” – Sansa Stark (George R.R. Martin’s “Game of Thrones”)

Take Our Money, Please!
We’ve followed our heroes Tyrion Lannister (Peter Dinklage), Jon Snow (Kit Harrington), and Daenerys Targaryen (Emilia Clarke) on a long and arduous journey from underdogs in Season 1, to leaders, and now, allies in Season 7. They’ve certainly come a long way. And as they reach the end of the road, we’re curious (and terrified) more than ever to see how their journeys will end. Though Season 8 is still far away (not due to drop until Spring of 2019), GoT fans are chomping at the bit for any and all manner of Game of Thrones news and/or merchandise. Geeks, you gotta love us. We’re soooo easy to please. It’s true. It shouldn’t be hard at all to find the perfect holiday gift for your Game of Thrones-obsessed loved ones. But if you’re stuck, we may have a few suggestions.

Dark Horse has been steadily adding to their Game of Thrones line over the years. These beautifully crafted collectible statues will melt the heart of even the steeliest and coldest Game of Thrones devotee. Whether they’re House Stark, Lannister, or Targaryen, here’s a look at some goodies that are sure to please any die-hard GoT fan.

I Prefer to Live in Denial…
As I gaze upon these figures, I like to imagine an alternate reality where Oberyn Martell (Pedro Pascal – Narcos, Kingsman: The Golden Circle) still lives. I am still traumatized by his death scene. (Look away, Andy! Look away! Not his beautiful face! I hate you, Mountain!!! Can’t wait for the Clegane Bowl when your brother smashes you to a bloody pulp, you monster! Whew… I needed to get that out of my system, but I digress.) Well, now you can gaze at Oberyn’s beautiful face in its perfection for all eternity. Sigh.

He Knows it All… And Says So Little… But We Love Him Anyway…
I thought it’d be hard to beat Dany (Emilia Clarke) riding to her nephew’s rescue (no longer a spoiler, people, except for Jon, who still knows nothing by the end of episode 7, but I can imagine he doesn’t care — cue 70s porn music — you know what I’m sayin’…). Well, Jon, we’ve got news for you! Can’t wait to see his face drop when he reaches Winterfell to receive the news from Sam (John Bradley West) and Bran (Isaac Hempstead Wright) — the Westerosi answer to the internet. Points to them for dropping some major knowledge — though our favorite little exposition potato and resident Three-Eyed Raven does like to wait until the 11th hour, doesn’t he? I’m pretty sure it’ll be worth rewinding a few times when Jon and Dany learn the truth about their familial blood ties. This beautiful Three-Eyed Raven Snow Globe will be a welcome sight on any mantle or display shelf, even if Bran’s predictions do come a little late in the day.

He Did it All for the Glory of Love…
Who doesn’t love Tormund (portrayed by Kristofer Hivju)? Loyal, brave Tormund. He’s truly grown on me.  Seasons 6 and 7 we saw the softer side of Tormund. He wears his heart on his furry sleeve. The Wildling leader has consistently supported and followed Jon Snow into battle against the White Walkers and the Night King and has managed to earn a place in our hearts. Let’s hope that Tormund survives long enough to win the heart of our favorite Lady Knight and “make babies” with Brienne of Tarth (Gwendoline Christie – Star Wars: The Force Awakens, Star Wars: The Last Jedi). Forget Jaime Lannister, Brienne. Tormund is a man who will fight for your honor. He’ll be the hero that you’ve been dreaming of… (Too much Peter Cetera maybe?) You know what I mean! Give the Ginger a break, girl!

Jeepers! Creepers! Keep Those Icy Blue Peepers Away From Me!
Speaking of the Night King, I’ve seen a lot of villains in my time, and this dude has got to be one of the scariest. He genuinely terrifies me and I’m made of pretty stern stuff. He almost makes Darth Vader look cuddly. Who the hell IS this guy really? Lots of theories, some hitting uncomfortably close to home. Some say he may be a Stark himself (shudders). That would just be a classic George R.R. Martin stab-you-in-the-heart reveal. Let’s pray our heroes come up with something to defeat this fearsome dragon-killer and his army of undead next season, or… as Tyrion likes to say, “we’re all screwed”. If you don’t mind his gaze (I swear his eyes are following me), this detailed Night King figure is a must-have piece for your Game of Thrones collection.

For more of these gorgeous collectibles from Dark Horse, check out our gallery below. 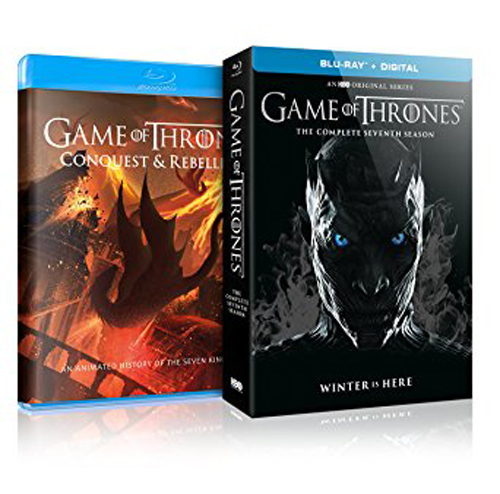 “If we don’t put aside our enmities and band together, we will die. And then it doesn’t matter whose skeleton sits on the Iron Throne.” – Ser Davos Seaworth (Game of Thrones)

Relive the Excitement… Every Heart-Stopping Minute of It!

Now, if you want to relive every butt-clenching moment of Season 7 (I was pretty much clenched for the entire week between episodes 6 and 7), why not pick up the just-released Game of Thrones Blu-Ray Box set? This 3-disc set comes with bonus features including featurettes on set and art direction, audio commentaries and interviews with the cast and crew, and behind the scenes videos. The interior box is graced by the faces of Tyrion, Jon, Cersei, and Dany, cast in a frozen blue with icy blue irises (because that’s not creepy at all).

Andy Says…
While we may be an obsessed and passionate lot, Game of Thrones fans are easy to spot, and therefore, easy to buy gifts for (not that I’m trolling for myself, mind you, just sharing…). If you find yourself stuck, come back and take another look. We’ll be here, bringing you the latest on GoT memorabilia and collectibles, because, quite frankly, we enjoy it too.

Just in case you need any reminders of how epic it was, here are two trailers for Season 7 of Game of Thrones.

As we impatiently and feverishly await the return of our favorite heroes and villains in Season 8, here’s a look at some GoT related content from the blu-ray release to tide you over until the series returns. This prequel video, Conquest & Rebellion: An Animated History of the Seven Kingdoms – Chapter One / Valyria’s Last Scion: House Targaryen, is narrated beautifully by none other than Harry Lloyd (Viserys Targaryen).