Return To Forever…
“I’m thinking I’m 17 years old again,” was the answer Carlos Santana gave when asked what he thought upon first hearing the lyrics of Greg Rolie’s “Anywhere You Want to Go.” That recently released single track and an album’s worth of others find the guitarist working once more with the musicians who created the Santana III album in 1971. The core of the original Santana band.


That Santana was a band to be experienced live on stage, was immediately apparent to anyone who compared the studio version of their premier jam tune “Soul Sacrifice” to the Woodstock soundtrack version. While their second record, Abraxas, may have yielded more recognizable hits like “Black Magic Woman” and “Oye Como Va,” but it was Santana III, with the addition of then 15 year old guitarist Neal Schon, that captured the group at the apex of their musical powers and finally translated the fire of their live performances onto studio tracks. Songs like the jubilant, horn studded, “Everybody’s Everything” and languid latinized blues “Taboo” sit next to barn burners like “Toussaint L’Overture,” “Jungle Strut” and “Para Los Rumberos.”

Ultimately the diverse musical tastes that informed what was best about the band also began to splinter them. You can hear it in the experimentalism of 1972’s Caravanserai album. Carlos moved toward a spiritual quest in collaboration with John McLaughlin. Rolie and Schon formed Journey, which in its earliest incarnation produced 3 albums of fusionist rock before morphing into 1980’s hit makers.

45 years have passed since the group was on stage together, but seated aside each other at Manhattan’s Signature Theater on April 12, 2016, Carlos, keyboardist Greg Rolie, drummer Michael Shrieve, conguero Michael Carabello, and guitarist Neal Schon were relaxed, jovial, and clearly happy to present the new project they call Santana IV. The press event included a 40 minute interview conducted by Joe Pascal of the Hudson Union Society, followed by questions from worldwide media representatives.


Love, Devotion and Surrender…
It was Schon, a fellow Marin California resident, who pitched a guitarists’ album to Santana several years ago. That suggestion eventually kindled this full blown reunion of the core 1960’s through early 70’s members.

“There’s pretty much a natural chemistry between Carlos and I guitar wise. We fall in together even more so on this record than on Santana III or Caravanserai,” said Schon.

“I surrendered to Neal,” admitted Carlos “I call him vortex. Ever since I saw him when he was a child it wasn’t cute, it wasn’t clever, it was just kick your ass vortex.”

It’s still their work ethic today. A “tornado of fire” with “intense intentionality” is how Carlos described the band while noting that many of their Woodstock era contemporaries (those still living) have reduced themselves to “embers” for any number of reasons. “We like to ignite ourselves in front of you and burn in front of you. Tony Williams, Miles Davis, Coltrane played like that.”


Soul Sacrements…
Each member is still quite reverential to their personal musical inspirations and more than willing to share. A healthy part of the press conference was a litany of artists that would stand as a perfect primer for young fans to sample. Carlos profusely thanked Michael Shrieve for turning him onto a stack of LP’s that years ago brought the “Miles and Coltrane genii” out of the lamp. Other influencers mentioned included Wes Montgomery, Wayne Shorter, Herbie Hancock, Cornell Dupree, Willie BoBo, Ike and Tina Turner, Jimi Hendrix, Bola Sete, Mavis Staples, Tony Williams, Marvin Gaye, Cal Tjader, Gato Barbieri, Aretha Franklin, Buddy Rich, John Lee Hooker and Les McCann.

In keeping with that ethos Santana IV features two tunes sung by Ronald Isley, founder of the Isley Brothers (“Shout,” “It’s Your Thing,” “That Lady.”) “He’s our King …more important than the Statue of Liberty or the Golden Gate,” said Carlos. The band recorded 16 songs with the 74 year old Isley over four days of sessions and the additional material may be slated for release as early as this coming fall.


More on “IV”…
In the meantime there is plenty to recommend and enjoy about the expansive Santana IV, which will be released on April 15, 2016 on Santana IV Records, distributed by Thirty Tigers/RED distribution on CD, double 180 Gram Vinyl with download card, as well as digital configurations. Album art afficianados will want to purchase the vinyl version, as a nice 12”X12” version of Heather Griffin-Vines’ design will reward visual sleuthing as you listen to the record.

Long time fans will welcome back the voice and organ solos of Greg Rolie, the core percussion section of the two Michaels, and the “entanglements” of Carlos’ and Neal’s lead guitar lines.

Many tracks have analogs in the early Santana canon, something that may not be immediately apparent to a younger audience that only knows the Rob Thomas and Michele Branch sung hits. That said, Supernatural era fans will find a familiar sonic territory here as IV is recorded and mixed for a modern audience.

The instrumental “Sueno” joins “Samba Pa Ti” and “Europa” on the list of exquisite Santana melodies, while shades of their freeform “In A Silent Way” performances creep into the ethereal “Fillmore East.” “Blues Magic” is designed to remind listeners of the blues origins of the group with its tip of the hat to Peter Green’s Fleetwood Mac, from whence “Black Magic Woman” originated. 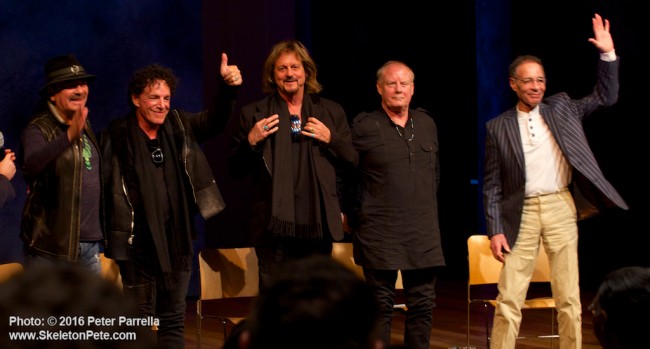 SkeletonPete Says…
With Santana IV, the originators have achieved their goal. You can go home after all. As Carlos professed, “I don’t want to ever lose that innocence. Being 17 years old forever. It should be a mind set, not dictated by a watch or the time or a calendar, and you can just park yourself with that innocence and wonderment.”