Lynch Mob…
Fans of 1950’s noir and 1960’s spy and surf film soundtracks will find a cozy sonic home in Silencio’s new album She’s Bad. Though the band describes itself as a tribute to the soundtracks of director David Lynch and his composer cohort Angelo Badalamenti, and continues to play live sets filled with those cues and themes, they have also expanded their scope with original compositions that emulate the progenitors of Lynch’s style. Doing so Silencio has produced a set of songs that stands in many ways as a musical history.

The album’s 18 tracks explore the components of what I term “outre wave”, the collision of rock-a-billy rawk, sunny surf, and greasy strip club rhythm and blues. For instance, “Surf Creep” is an amalgam of all the hallmarks of 60’s stinging twang, and could serve as a primer for those uninitiated to the sounds of The Ventures, Duane Eddy, Hank B. Marvin, and Vic Flick’s 007 guitar work.

“Low Down Dirge” strolls in the footsteps of Link Wray’s “Rumble.” The increasingly modulated, shattering, tremolo of Wray’s tune was also the inspiration for Led Zeppelin’s “Immigrant Song.” “Passing Through Four Doors” offers a cool beatnik jazz groove that would serve as an alternate cue for Juliet Prowse and Sal Mineo to dance to in Who Killed Teddy Bear (1965).

A Shot in the Dark…
“Creeper” is a furtive trip into Henry Mancini territory that will have you visualizing the Inspector Clouseau cartoon character from Pink Panther title sequences. Mancini’s influence on this genre cannot be overstated. He might be viewed as its de facto godfather. His Peter Gunn and Pink Panther themes alone became the well spring and blueprint for a torrent TV themes including I Spy, The Avengers, Danger Man and Secret Agent Man, The Prisoner, The Munsters and even The Odd Couple. 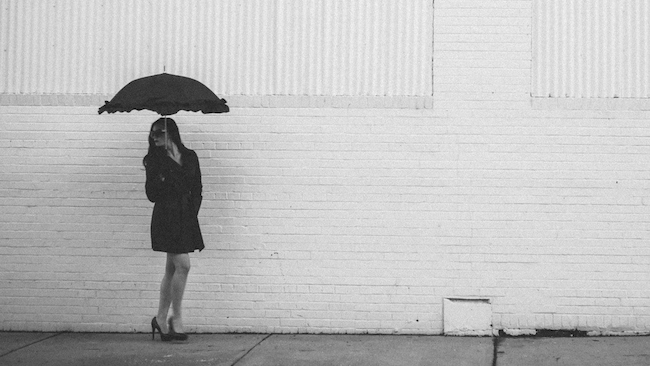 Oh, Dessa…
Lynch has notably injected Roy Orbison’s “In Dreams,” Little Jimmy Scott singing “Sycamore Trees,” and Chris Isaak’s “Wicked Game” into his soundscapes, and following suit Silencio smartly includes plenty of vocal tunes featuring Dessa Poljak, Silencio’s Betty Page meets Jessica Rabbit chanteuse. Her delivery harks back to Marilyn Monroe’s breathy style and she can perform a smoldering rendition of minor key blues, and genre touchstone, “I Put A Spell On You” in concert. The album’s title track shares some resemblance to that seminal Screamin’ Jay Hawkins tune, but resolves about a third of the way through to an interesting interlude, with big horns, that would not be out of place on a Cilla Black arrangement. Poljak also channels the icy edge of Twin Peaks‘ Julie Cruise, especially on “Dark Dreams,” which to my ear is the most Lynchian of offerings on the album.

Bad to the Bone…
She’s Bad not only delivers what it promises, a compendium of sounds that emulate Lynch’s soundtracks, but the album further succeeds because it has the “ring of truth.” These songs do not just ape their ancestry but add nicely to the genre at large. It’s clear that Silencio has grown from being sincere and proficient fans covering their favorite cues to exceptional purveyors of the sound they love.

SkeletonPete Says…
I will admit that when I first became aware of Silencio I was skeptical about their myopia for one auteur, but their ability to explore the roots of Lynch’s work on She’s Bad makes for a wider musical experience.

I’ve was lucky enough to hear Silencio live at New York’s Le Poisson Rouge (LPR) last season, and will be there again when the band returns this summer. I was happy to see that guitarist Kirk Salopek had discovered the virtues of New York luthier Jeff Kadlic’s Champtone Guitars, which I first encountered at the much missed Brooklyn Bowl Guitar Shows.