Skylanders’ New Adventure…
Mid-October 2013 will see the world-wide release of Activision’s next step in the overwhelmingly popular Skylanders game series. Started back in 2011 with Spyro’s Adventure, the game offered play via collectible toys, which when placed on the power portal entered the video game. Skylanders matured last season with larger “Giant” game pieces, light features, and more articulate play capabilities.
Bombs Away Dream Babies…
Now Activision expands the possibilties exponentially with Skylanders SWAP Force, adding 16 new characters with detachable upper and lower sections that can be mixed and matched according to game task needs.

It’s a whole new adventure and mythos for the SWAP Force. Activision explains, “In Skylanders SWAP Force, Portal Masters embark on an all new adventure in the mysterious Cloudbreak Islands, home to a mystical volcano that erupts every hundred years to replenish the magic in Skylands.  During an epic battle, a brave group of Skylanders were caught in the volcano’s eruption, which blasted them apart and sent them to earth.  But, the magic of the volcano gave these heroes a remarkable new power — the ability to swap halves – turning them into a special team known as the SWAP Force.  Meanwhile, Kaos is back with a new evil plan.  And now, Portal Masters everywhere must reassemble the SWAP Force — in their original form or in new combinations — and send them back to Cloudbreak to save Skylands!”

These previously unexplored areas of Skyland will be accessed via all new powers of the Swap Force heroes. Along with jumping for all characters – including legacy pieces – SWAP Force will add flying, digging, climbing and even teleporting to the various figures’ attributes, all the better to thwart the villainous Kaos. 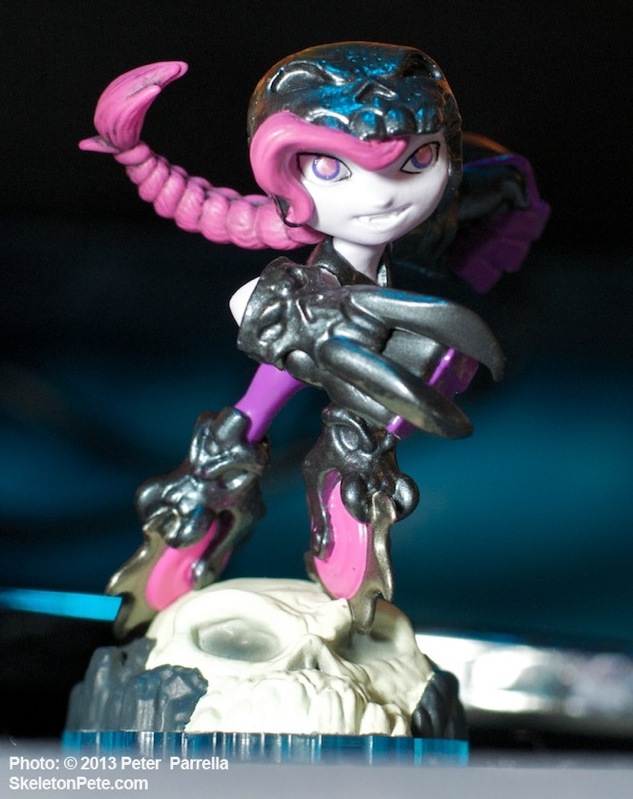 I’m A Little Bit Country, I’m A Little Bit Roller Brawl…
SWAP Force characters will share each other’s powers and take on new screen names based on the pieces attached. For instance the top of Magnacharge added to the base of Washbuckler would become MagnaBuckler on screen. Additionally, 16 new Core Characters, 8 Lightcore pieces and 16 re-imaginings of favorite legacy characters, like the new Ninja Stealth Elf, will join the team. I’m particularly found of scorpion tressed roller derby queen Roller Brawl, with her skull helmet, gloves and base.

Parental Units Should Know…
SWAP Force continues the forward compatibility for all previously purchased game pieces and even adds additional powers to them in the SWAP Force realm. All legacy characters will get power boosts (“Wow-Pow”) and Level Caps of 20. The Skylanders series has offered exciting though reasonably mellow game play for the younger set, but don’t be surprised if you get hooked on the fun too.

Expect the multi-platform hit to be available on October 13 in North America, October 16 in Australia and October 18 in Europe. As usual, platform specific starter-kits will include the new portal of power, game disc, and several game characters.