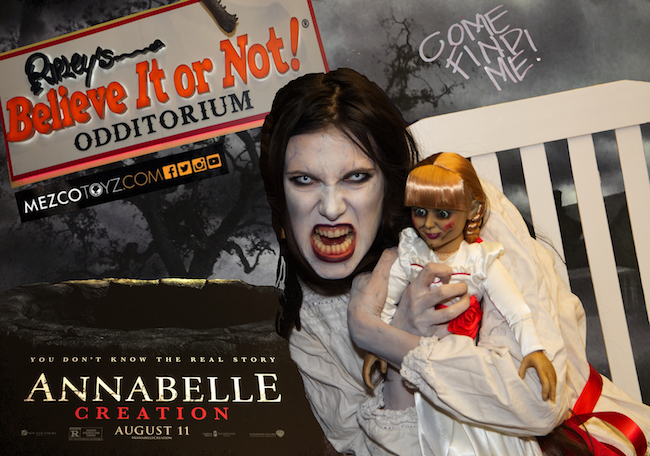 Dolorous Dollies…
The Mills Brothers once sang “I’d rather have a paper doll to call my own, then a fickle-minded real Iive girl.” They may have had second thoughts had they met Annabelle. Not since The Twilight Zone’s Talky Tina has there been such an unholy host. Introduced to audiences in The Conjuring (2013) the doll has become a pop culture icon warranting a self titled film in 2014. On August 11, 2017 New Line Cinemas and Warner Brothers will reveal the backstory of the menacing muñeca with the release of Annabelle: Creation, directed by David F. Sandberg (Lights Out & the upcoming DCU Shazam).

Finders Weepers…
To celebrate the film’s imminent arrival Mezco Toyz – sole authorized maker of the official Annabelle prop replica – and Ripley’s Believe It Or Not! Times Square – the fine folks who pride themselves on displaying all things weird and wonderful from across the globe – partnered for a special scavenger hunt. On August 4, all intrepid Ripley’s visitors had chance to track down 13 Mezco Annabelle replicas hidden throughout the maze-like Odditorium complex.

Of course Ms. Annabelle was in fine company surrounded by the over 500 unique items on view at the Believe It Or Not! exhibition. The collection of curiosities now known worldwide began in the 1920’s as a newspaper feature created by illustrator Robert Ripley.

END_OF_DOCUMENT_TOKEN_TO_BE_REPLACED

My name is Victoria Winters… well, no, it’s not, it’s Andy Melendez but it was a dark and stormy night over the Great Hotel Marriott, where Skeleton Pete and I attended the Dark Shadows Festival held here in Downtown Brooklyn this past weekend (August 18-21). It’s been a while since I’ve attended any kind of convention, but I have to admit, there was a feeling of “homecoming,” at least for me, when we arrived. These are my people. The Festival was celebrating the 45th Anniversary of the legendary cult TV series, created by the late Dan Curtis.

Impressions
I was surprised by the number of attendees for a Friday night alone (opening night tends to be light and a fun time to just explore without feeling too claustrophobic). I was even more surprised to learn that half of them had never been to a DS con before. Ah, “Convention Virgins,” I lost that distinction at 15 and have been a proud con-geek ever since… but I digress. For many others, it was like a family reunion… laughing, reminiscing and reconnecting with old friends.

I loved the setting created for the series’ stars onstage. It was a charming replica of the original Collinwood sitting room. I almost ran up there myself just to have a seat on the sofa and pretend I was having tea by the fireplace with the late Joan Bennett (Elizabeth Stoddard) or Grayson Hall (Dr. Julia Hoffman). The dealer’s room looked a bit sparse, but they were literally still unpacking as we arrived. I dare say most attendees were less concerned with memorabilia and more concerned with the honored guests in their midst, some of them already there, meeting convention goers and signing autographs.

Both Lara Parker and Kathryn Leigh Scott have new books coming out (both have been authors for some years now) — Lara has a third Dark Shadows novel coming out, and her first, “Angelique’s Descent,” is going to be re-released with a new 35-page chapter. Kathryn has been busy as well and her book, “The Bunny Years: The Inside Story of the Playboy Clubs and the Women Who Worked as Bunnies,” about her experience as a Playboy Bunny, has been co-opted for use in the upcoming NBC series, “The Playboy Club.” Lara and Kathryn noted rather cheekily, now is time to strike while the iron is hot, as things ramp up for the May 2012 theatrical film release of the Dark Shadows movie starring Johnny Depp as Barnabas Collins. I have to admit, I was terribly excited to finally find out a release date for the film, as I hadn’t heard much since the news first broke. It was lovely to hear that Tim Burton and Johnny Depp asked the original series stars to film cameos for the movie. Jonathan Frid, Lara Parker, Kathryn Leigh Scott, and David Selby were flown out to London to film at the legendary Pinewood Studios where they had a blast.

Highlights
I was thrilled to learn the first two theatrical releases of the Dark Shadows films, “House of Dark Shadows” starring Jonathan Frid and Kathryn Leigh Scott and “Night of Dark Shadows,” starring David Selby and Kate Jackson, were coming to DVD. Stars from the original film were invited back to do Foley work on “Night of Dark Shadows” so they could include 30 minutes of lost footage on the new DVD as part of a long-time plan to restore the film since the footage was recovered in 1999. That is set to coincide with the release of the 2012 film.

As a veteran of these things, the highlight of the evening for me was seeing the unfinished, never-before-aired pilot of the 2004 remake of Dark Shadows. I’d only heard about it and had exhausted all avenues to obtaining a copy (and believe me, I have many). The remake had been intended as a replacement for the WB series “Angel.” It was more than fitting, as Angel and many other repentant vampires owe their fangs to Barnabas Collins. Dan Curtis was also involved after his 1991 “resurrection,” with Ben Cross and Joanna Going, was tragically cut short after only one season. However, sadly, part way through filming the 2004 pilot, they lost their Director and with it, their direction.

Associate Producer, and convention organizer (as well as marketing director for Dan Curtis Productions and consulting producer on the new film), Jim Pierson, explained what happened with the pilot and I was sorry to hear it never saw the light of day. It was a shame, as it showed promise, had some creepy special effects and if it had kept the intention of the original series and Dan Curtis’ gothic vision, I think it would have found a home, and would have rivaled newcomers “Supernatural” and “Vampire Diaries.” A glaring omission, however, was the loss of the original series music. I don’t know if they intended to replace it later on, but the classic title theme was missing, along with “Josette’s music box,” and to me, as a fan, these are too precious to lose.


Eagle Rock Entertainment would like to ensure you have a very Deep Purple summer and to that end have begun a product roll-out that includes Purple Mark I expanded remasters, four remastered live albums and a couple of early David Coverdale solo albums. Along with the reissues Eagle Vision offers something new in the form of a long overdue focus on Purple Mark IV in the form of a DVD/CD documentary set. It’s called “Deep Purple, Phoenix Rising” and features the Coverdale, Hughes, Bolin, Lord and Paice era. It’s a loaded package of goodies and includes the previously unreleased Budokan film from 1975, visually spruced up and 5.1 remixed. I really dig it and tell you exactly why in my review at PiercingMetal.Com.