Many won’t remember Richard Carpenter as I do, but he had a profound influence on me as a writer, musician and as a spiritual person. He even inadvertently shaped my first visit to England, including a near-disastrous side trip to Nottingham back in 1994 (a story I will save for another time). Here is my tribute to Richard Carpenter.

“The fire burned bright in him, and for awhile, it warmed us all…”

This week the UK mourned the passing of screenwriter, author and actor Richard Carpenter.

Richard Carpenter (or Kip, as he was commonly known) was born in King’s Lynn, Norfolk, England in 1933. Kip studied acting at the Old Vic Theatre School and later went on to act in many British TV shows and films in the fifties and sixties.

After his stint as an actor, Kip turned his attention behind the camera where he went on to create many popular British TV shows including Catweazle (1969), about an 11th century wizard accidentally transported to the present day, the historical drama Dick Turpin (1979-82) and the adventure series The Smuggler (1981).

However, to this day, he is best known internationally for creating the HTV/Goldcrest series Robin of Sherwood, which ran for three seasons (1984-1986) and starred Michael Praed (Dynasty, The Secret Adventures of Jules Verne) as Robin of Loxley and Jason Connery (The Secret Life of Ian Fleming, Smallville) as Robert of Huntingdon. 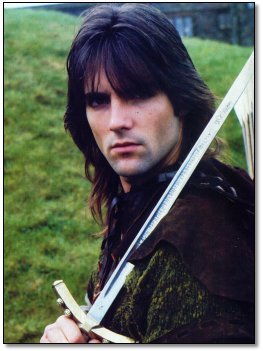 To date, Robin of Sherwood is considered one of the most influential treatments of the Robin Hood legend on screen and it was the first to introduce a Saracen in the character of Nasir (portrayed by Mark Ryan – First Knight, Transformers, The Prestige) as one of the outlaws (later inspiring the character of Azeem in Kevin Costner’s Robin Hood: Prince of Thieves, so much so, the name had to be changed from Nazeem to Azeem to avoid rights issues).

Without putting too fine a point on it, no other version of Robin Hood has matched the setting, atmosphere and the level of detail for the period, in spite of some niggling issues with King Richard’s timeline (King Richard as portrayed by the indomitable John Rhys-Davies — Indiana Jones, Lord of the Rings), while maintaining the spirit of swashbuckling action/adventure, romance and fantasy.

Swords, Sorcerers and The Old Gods

Richard Carpenter’s Robin of Sherwood had a unique spin on the classic legend. It was the first to incorporate elements of mysticism, magic, sword and sorcery throughout the series. It included pagan themes and prominently featured the Horned God, Herne the Hunter, as a central figure. “We can all of us be gods…” Herne (played by John Abineri – Doctor Who, Godfather III) says to Robin of Loxley in the first episode, Robin Hood and the Sorcerer.

As quoted in a 1998 interview with Allen W. Wright, Richard explains why:

“Robin Hood is one of the few perennial legends with no magic in it. There is a fragment of a ballad called Robin Hood and the witch I believe – but tantalisingly breaks off after a stanza. The middle Ages were extremely superstitious and much remained of the old pre-Christian fertility and tree worship religions. You must remember that the country was largely based on agriculture: and the crops and the turning year were extremely important to everyone. Vestiges of this still remain throughout Europe. Although the Mother Goddess was supreme – the male principle was considered equally important. The question is whether Herne is a shaman or if he – like shamans do – ‘becomes’ the god at certain times after practising certain rituals.”

Sadly, the series came to an end when Goldcrest was forced to pull out due to financial trouble with their film division. Goldcrest was behind two enormously successful films, Chariots of Fire (1981) and Gandhi (1982), but hit hard times in the mid-1980s. HTV could not afford to produce Robin of Sherwood alone and no more episodes were made. 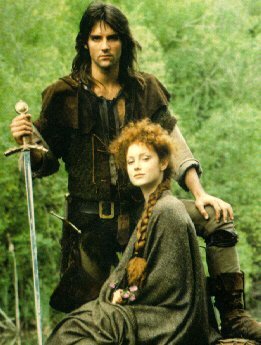 The Spirit of Sherwood and The Children of Israel

Richard’s vision of unity extended beyond the outlaws themselves… I can’t help but be warmed and inspired by his message of peace in the episode Children of Israel. When a Jewish family, fleeing persecution at the hands of the Sheriff of Nottingham and Sir Guy of Gisburne, is discovered by Nasir, he gently coaxes the frightened children out of hiding. There is a moment when the typically stoic and silent Saracen smiles, letting them know they are safe with the outlaws. Nasir informs Robin that he understands some of their language and a bond is formed between the Muslim and the “Children of Israel.” I still get misty thinking about it.

In 2011 it was announced by Stansfilm Productions that Kip had a new script for Robin of Sherwood, which would pick up after the series ended, 20 years later. In a recent interview with Clive Mantle (Aliens 3, Game of Thrones) who played Little John in the series, he stated that many of the surviving cast (including Ray Winstone — Sexy Beast, 44 Inch Chest, Hugo) had approached ITV a few of years earlier about the possibility of making a TV movie or mini series (written by Richard Carpenter) to finish the outlaw’s tale.

Sadly, with his passing, it seems unlikely that Kip’s Hooded Man will return to our screens. I hold out hope that perhaps someone will pick up his mantle… much like Robert of Huntingdon did from Robin of Loxley.

And perhaps… Herne will choose him/her? 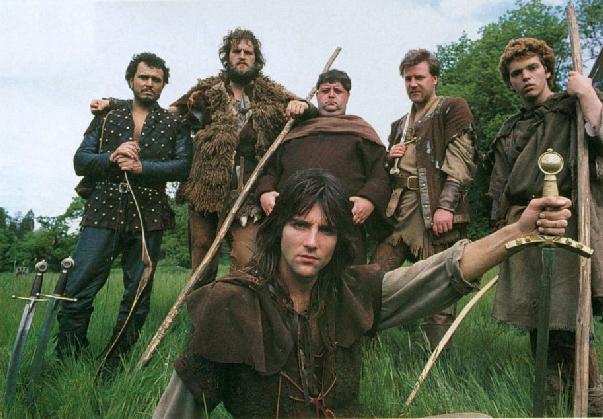 As reported on the Robin of Sherwood fan site, Spirit of Sherwood, Richard died of a heart attack on February 26, 2012. He is survived by his wife, actress Annabelle “Annie” Lee (Mad Mab in the RoS episode Rutterkin) and their two children, Tom and Harriet.

It is a shame that Kip’s work is not as well known here in the States, but his legacy survives and extends far beyond another clichéd retelling of the Robin Hood legend. It lives on in the hearts of all that were touched by his unique vision. It was one where the common man (and woman) rises up against tyranny and oppression. Through unity, friendship, strength of will and spirit, he fights the good fight, inspiring all those with whom he connects –- men, women, friars, shepherds, Saracens, noblemen and Saxon peasants alike — all fighting alongside one another against the “greatest enemy.” Whether it is Medieval England or here in the 21st century, it is a lesson we could do well to remember during these troubled times.

“Nothing is forgotten… Nothing is ever forgotten.” You won’t be forgotten either, Kip.

Robin of Sherwood is available on DVD from Acorn Media and Amazon.com and has also recently been reissued on Blu-Ray (region free) and remastered for both sound and picture quality.

For more on the bold outlaw himself, visit Allen W. Wright’s Robin Hood Bold Outlaw of Barnsdale and Sherwood.

For more on Robin of Sherwood: The Return, please visit Stansfilm Productions.

Thanks so much for writing this appreciation of Kip Carpenter and the Robin of Sherwood series for the blog. I was always fond of how this franchise interpolated the pagan “greenman” with the Robin legend. I still have a VHS of the Herne episode squirreled in my collection.

Might be time to consider adding the Blu-Ray’s to sit next to my Prisoner BL package.

It was both a pleasure and an honor. Always happy to share the things I love. My hope is someone else will learn of Kip’s work and of Robin of Sherwood and it will bring some joy into their lives as well. 🙂

Kip Carpenter was born in 1929, not 1933 as is being perpetuated round the web just now for some reason. Just thought I’d let you know. He was 82 and not 78 God rest his soul.

Paul, thank you for commenting on the D.O.B. for Kip.

I’ve seen many different conflicting sources as to the date of his birth, so I went with the one most readily available and posted on the fan site as well, as they had some contact with Kip.

However, I do appreciate the need for accuracy. I may just add a note to that effect, stating that both have been reported.

Today is his first death anniversary. Rest in Peace.