Our friends at Mezco Toyz have just released a look at their exclusive San Diego ComicCon 2015 (SDCC) Living Dead Doll. From behind her mask Wicked Walpurgis will invade your dreams leaving bloody footprints on your brain.

Germanic Panic…
Previously available only in Germany where Walpurgis Nacht (also known as Witches Night) is celebrated on April 30, Walpurgis is now being offered in this limited edition “re-imagining.” You can add her to your Living Dead Doll collection whether or not you’re attending the convention. Mezco will open preorders on Monday May 18th at Mezco Walpurgis Pre-Order. Items are expected to ship the week of July 6, 2015.

All photographs courtesy of Mezco Toyz. 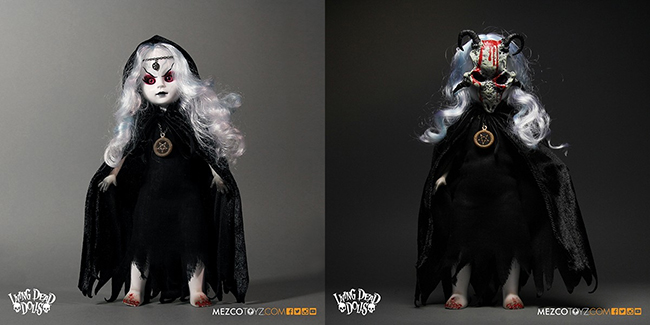 Yikes that is one terrifying Living Dead Doll and something that would give me nightmares if it stood on my shelf. Of course I know a lot of people who relish that idea and cannot wait to send this narrative to their attention. Jeepers am I spooked now. Brrrr.

Yeah, this one is pretty cool. With the removable mask it’s like having two different dolls.