In this 80th anniversary year of RKO’s King Kong and 40th of Hip-Hop music, writer Randy Weiner and writer/director Alfred Preisser offer up a lighthearted jibe at the theme of outre culture blunted by mainstream acceptance and the enduring legend of “T’was beauty killed the beast.” In addition to Kong-o-philes, life long New Yorkers will get the insider jokes, as will (strangely enough) any recent viewers of the Adrian Brody/Beyonce Knowles film Cadillac Records.

Actors Matthew LaBanca, David Michaels and Sid Solomon play Moe, Hyman and Izzy, the Gold Brothers, whose failing record company – Gold Records – needs a boost of new musical blood. Secretary and would be socio-anthropologist Faye Wellington (Rhiannon Hansen) brings them a demo of MC “Kong” lurking in the deepest Bronx. The brothers’ ultimate goal is to sign the indigenous rapper to their label and collect the publishing royalties. The Gold Brothers’ quick fire tandem delivery plays like The 3 Stooges and Marx Brothers, with stances informed by Gilbert Shelton’s Fabulous Furry Freak Brothers. Along the way they encounter mutant rats of unusual size, Thriller style dancing zombies, cops on the take, and spar with the Baron Samedi-like witchdoctor. Nothing is sacred or too puerile. For instance, one the Gold Brothers’ chronic flatulence equals the Kong subduing “gas bomb.” 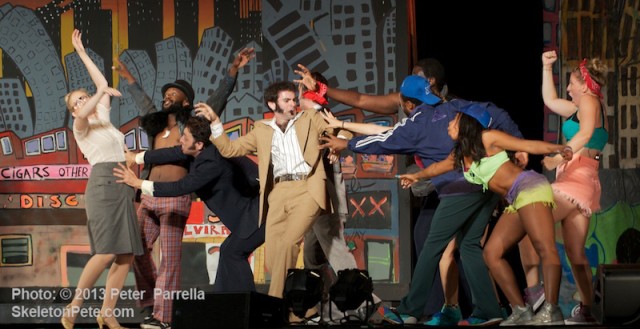 The Kong character gets a gender flip via actress Tracy Jacks’ portrayal (a goof on “Queen” Latifah?) which triggers Faye to expound on the role of powerful women in male-less households, question her own sexuality, and leads to a loopy Barry White seduction scene in Kong’s lair.

Although the show is part of the 2013 Summerstage season’s “This is____Hip-Hop” series, it plays a lot more like Mel Brooks than Melly Mel. Wes Matthews’ compositions are show tune oriented, save one of the representations of Kong’s rap repertoire. Choreographer Ryan Kasprzak and associate Ellenore Scott give the characters plenty of kinetic range from Al Jolson Vaudeville gesturing to In Living Color fly girl cool and throw in some cartoonish slow motion chases for good measure. The graffiti emblazoned sets, designed by Isis Kenny were deftly maneuvered by the stage crew offering seamless scene changes throughout the intermission-less show. It was particularly fun to watch Jacks’ heartbroken Kong languishing at the top of the Empire State Building, while a rabble of sycophants, hucksters and nay-sayers mill about below.

The card carrying politically correct will need to leave their inhibitions at the door as no ethnic or New York City stereotype is spared. It is important to remember that successful satire points out the absurdity of its targets. King Kong succeeds while taking good natured swipes at everyone from Moses to Robert Moses. Though there are no fall-down-the stairs laugh moments, the play sustains itself with continued chuckles, elicited by a series of sight gags and nudges and winks for those who lived through New York City’s “Pre-Disney” grind house years, or maybe tried to make a living in the music industry. I’ve done both. At the end of the presentation I realized I’d been smiling – knowingly – for its entire length.

The free presentation, produced by the City Park Foundation’s Summerstage and sponsored by Time Warner, has up-coming dates at the following locations.

Check the Summerstage Website for more details on show times and directions.