B.B. King Blues Club and Grill in New York City’s Times Square was packed to the rafters with blues music lovers and musicians on February 23, to celebrate the birthday of guitarist Johnny Winter. Winter is noted for his slide guitar work and cover songs which he invariably makes all his own. Over the last several years the Texas blues legend has played “A Season of Winter” residencies at the BB King club.

Along with recording his own best selling albums, Johnny got his dream of working with Muddy Waters, producing several albums for the Blue Sky/Columbia label that are the best of Waters’ post Chess Records work. It was a labor of love and respect for the seminal blues master that landed Water’s three Grammy awards. Now, at 70 years old and still playing his hard driving brand of blues rock, Winter finds his own stature – like Muddy’s – elevated to blues patriarch. A well earned and deserved recognition.

Amid shouts of “ROCK N ROLL” bursting from the crowd at regular intervals (mimicking Johnny’s patented exhortation) Winter and his band turned in a set loaded with favorites. Chuck Berry’s “Johnny B. Goode,” the Rolling Stone’s “Jumpin’ Jack Flash,” Howlin Wolf’s “Killing Floor,” and “I got my Mojo Working” all got workouts augmented by a steady stream of musical admirers, like Popa Chubby, Jon Paris, Joe Lewis Walker, Debbie Davies, James Montgomery, Frank “King Bee” Latorre, and show opener Lance Lopez. Winter turned up the heat and turned out some blistering slide guitar leads, bringing wide grins to the faces of his musical compadres. Though each player is exceptional in his/her own right the gig was about homage to a master and mentor not a head-cutting session.

After confetti blasts and a Texas shaped birthday cake was presented, fellow Texan Mike Zito gifted Winter with a customized guitar. The capacity crowd knew what was coming as Johnny was handed his signature Gibson Thunderbird guitar and the band completed the night with their raucous take on Bob Dylan’s “Highway 61 Revisited.” 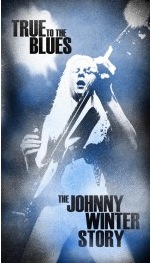 True To The Blues Career Retrospective…
A career spanning overview of Winter’s work, called True To The Blues, will be issued February 25, 2014 on Sony’s Legacy Recordings Label. The 4 CD box set will include, new liner notes, kudos from his peer players and two previously unreleased live tracks originally recorded at the 1970 Atlanta Pop Festival. Here’s how the company describes the package.

“Halfway between the British blues revival of the ’60s and the southern rock renaissance of the ’70s, the six-stringed genius of Johnny Winter has caught countless listeners by the ears, from Houston to Woodstock and beyond. His high-energy approach to the blues – reverent to tradition but fiercely of a style all his own – made him not only one of the most sought-after new artists of his time, but a peer and equal to the blues legends he worshiped from the beginning. This career-spanning box set captures Johnny’s most electrifying performances over four decades of rock and roll and celebrates his 70th birthday which is on February 23, 2014.”

There is also a documentary film in the works called Johnny Winter:Down and Dirty.

SkeletonPete Says…
It was a great night of celebration for an iconic blues player. As usual it’s lots of fun covering a B.B. King Club show along with PiercingMetal’s Ken Pierce. I also got to chance chat about six string things with NY Luthier Joe Kaufman of JKaufman Guitars, and was glad to reconnect with Elmore Magazine photographer Arnie Goodman.