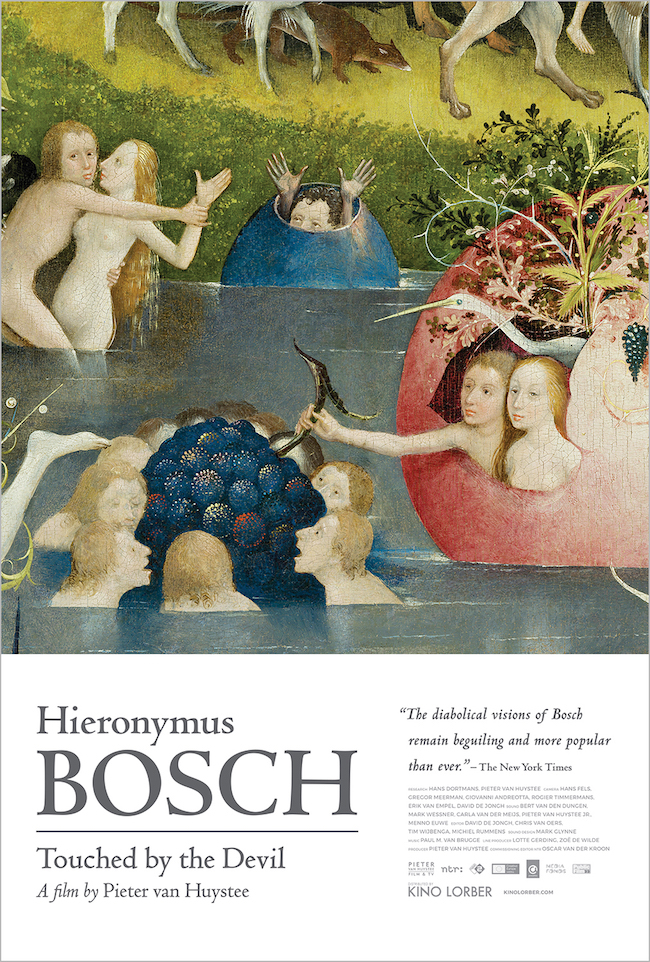 Bish Bosch…
If Hieronymus Bosch: Touched By the Devil were a painting by the titular artist it would likely depict a level of Hell with five men attempting to traverse an endless sea of eggshells without breaking any. The five men would represent the central antagonists of this engrossing documentary that delves as deep into the wrangling of museum curators and art historians as it does the artist in question. This group of Dutch technicians and theorists are not only on a mission to examine the extant works, but to cajole loans for the quincentennial events of the artist’s passing, for his hometown. As it turns out Den Bosch has no Bosch’s of their own. The rub? Well… intimating to a museum like Madrid’s Prado in Spain that some of their prized Bosch’s are not actually in the artist’s own hand but likely by workers in his studio (or even painted in his style posthumously) is similar to telling a Mother her baby girl is ugly – then asking to borrow her for a while.

Garden of Earthly Debates…
Producer/Director Pieter van Huystee follows the art of the art deal well, being quietly privy to key moments in the negotiations. While the wrangling is portrayed with good humor, it is also clear the monetary stakes are ridiculously high for each institution. The level of unease is palpable, and forensic findings are always treated as debatable with defense being the best offense.

Devils In the Details…
That is not to say that we aren’t treated to the most minute perusal of Bosch’s work as any one has had since the artist himself. Huystee pulls us into microscopic views of the artist’s obsessively detailed opuses filled with the most inventive punishments this side of Dante. The paintings are denuded by infrared scans to reveal their original sketches, many of which are spectacularly different than the finished works. Bosch himself lived his entire life in the Dutch city of Den Bosch. His municipal life is well documented, his marriage, his taxes, but the man wrote nothing of his artistic intentions and motivations. He only left the work to speak for itself and 500 years worth of speculation has followed.

Double Dutch…
Van Huystee was on hand at the Sunday afternoon Film Forum showing I attended. He graciously answered questions from the audience after the screening. He delineated the constraints of time and access he worked around as he followed the investigators from country to country. Huystee was sanguine about The Prado’s last minute attempt to halt the film’s release, while also willing to admit his countryman’s idea of diplomacy could be a bit “direct.”

The film is to the point, tightly edited, with some truly unexpected surprises and an ironic twist. The opportunity to see these paintings from a moth’s eye view should not be missed. You will never experience Bosch’s work better than this and you will learn a bit about the business of art, and the nature of humans along the way.

SkeletonPete Says…
Anyone enjoying series like Raiders of the Lost Art and BBC’s What Do Artists Do All Day, or the recent documentary Tim’s Vermeer, will want to add this to their must see list.

Also visit the Bosch Research and Conservation Project online for detailed information about the artist and their newest publications.