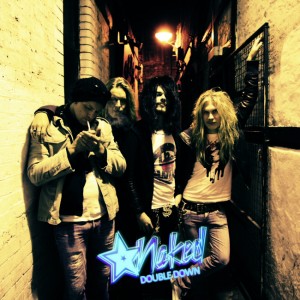 Revved up, fist pumping music that’s serious about only one thing; having some serious fun. That’s what Naked present and represent. It’s a brand of party rock that came out of garages and frat houses in the sixties to mutate into the likes of everything from The Stooges and The MC5 to The New York Dolls, Cheap Trick, and Kiss. Hailing from Helsinki Finland, home of Hanoi Rocks (probably the only 80’s glam band that got it right), Naked have gained much success, an international following, and radio play since their inception in 2001.

Bowery Boyz
I caught the July 20th opening night set at The Bowery Electric on New York’s Lower East Side; a fitting spot to begin since the video for single “Sonic High” prominently features East Village sites. Though essentially plugging their newest album “Double Down” the set included a nice mix of material from across their ten year career. Kicking off the evening with “Revolution” the band immediately displayed its strong suit, trashy rhythms with instantly catchy choruses punctuated by three part harmony vocals. Naked’s ability to pull off their song’s recorded harmonies on stage is impressive and was highlighted later in the set by a surprise snippet of the acapella opening of Queen’s “Fat Bottom Girls”.

While each member clearly exudes his own personality, offering the audience a host of possibilities to focus on, the group also gives off a cohesive “band of brothers” vibe. Wiry lead vocalist “The Muff” – so dubbed for his mushroom cloud of pitch black hair – is an energetic and engaging front man. Minus the goatee he sports in the band’s videos he gave off an even more youthful appearance as he exhorted the fans to join in on sing-a-long choruses. In addition to vocal duties Muff chunks out the raucous rhythm chords that define this style of music. Bassist Ilari was all smiles and exuberance belying the fact that he had only arrived in The States a few hours before the gig and guitarist Zack reeled off strings of lead melodies between singing harmonies. “Mr.” Tikka’s solid drum work added a sturdy backbone to the freneticism that unfolded before him.

I will confess that Naked won me over early when I spied a Mosrite “Ventures” guitar on stage. It’s a garage punk fan-boy’s sucker punch if there ever was one. Though they left the confetti machine at home, it was great to experience the band’s play-to-the-rafters style in the Bowery Electric’s confines.

Still Time To Get Naked
As of this writing there is still an opportunity to catch the band in the New York area, which I highly recommend you do. Check Naked’s website for current tour details.

Where’s the Pictures, Pete?
My photo coverage of the Bowery Electric gig can be found here. Lots of images to document the rollicking good time had by all. You should also check out Ken Pierce’s fun “Day Out With The Muff” report.