It was great to get an early look at Mezco Toyz’ newest products as outlined in my previous post. Even so, one key piece was missing from the 2014 press preview. The prototype for the upcoming Creature From the Black Lagoon Living Dead Doll was not on view. With the catalog photo as a tantalizing tease I was dying to see it “in the flesh,” but it was unclear if “the creach” would be ready for exhibiting. As you might guess I was thrilled to find him grandly displayed, arms outstretched in his classic pose, at Mezco’s Toy Fair booth today. Now I’m dying to own one.

I’m a fan of Mezco’s stylized spin on iconic figures and I think they’ve done a fabulous job of translating the scaly stalker into an LDD. I love how this sculpt manages to imbue the monster with the Living Dead Dolls’ signature child-like look without blunting its inherent menace. The Creature’s amphibian “jumpsuit” covers a fully articulated body approximately 8 inches tall. I think this is easily my favorite of the LDD Universal Monster series so far.

Creach collectors can look to Fall of 2014 for its release. 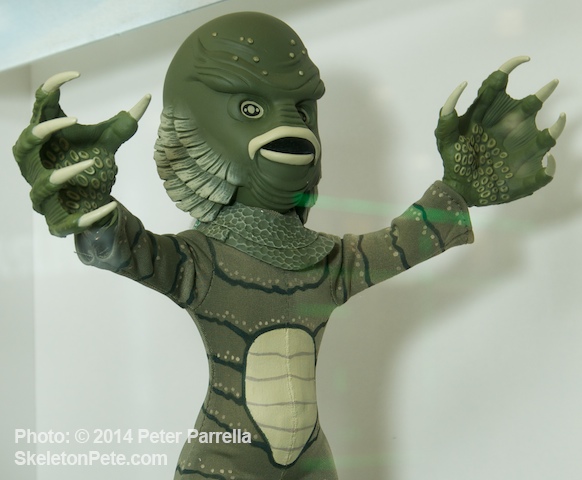 That is amazing! I love LDDs and the Creature is my favorite Universal Monster, so I can’t wait for this release too!