Costume Ghoulery…
We recently reported on playing hide and seek with that muñeca of mayhem Annabelle during Mezco Toyz’ scavenger hunt event at Ripley’s Believe It Or Not Odditorium. Now we’d like to launch the witching season at SkeletonPete with the announcement of Mezco’s Annual Living Dead Doll Halloween Costume Contest. It’s a perfect chance to unleash your inner demons, scare the dog, and grab some giveaways too. Competition can be fierce, do your bloody best. Follow this link for Contest entry rules.

I Was Working in the Lab, Late One Night…

BTW, we prefer our faux sanguinary experiences to be completely edible. What vampire wouldn’t?  When making up the little creatures, or yourself, consider some non-commercial,  red dye free, alternatives for your fake blood mixture.

In a bowl, combine:

Add a teaspoon of Water and stir.

Candy Colored Kisses…
Mezco Toyz’ continues their honored tradition of Halloween themed Living Dead Dolls. These denizens of darkness have delighted collectors for nearly 20 years.  The 2017 Fall Exclusive is a scary little fairy called Sweet Tooth. Decked out in the colors of the season, she’s ready to trick or treat. Her silk screened sweater is adorned with a jack-o-lantern on the front and “Living Dead Dolls Halloween 2017” on the back. Her grin reveals the candy corn shaped choppers that give her her name. Like all LDD’s she comes in a coffin display case, with official certificate of death. Production is annually limited to only 666 dolls.

Wearing the included enamel pin may help you ward off the jealous stares and evil eye of those who do not manage to snag one of these toothsome cuties.

Editor’s Note: On September 27, 2017 announced Jeff F. of Auburn, Washington as the randomly selected winner of the pre-order for Sweet Tooth and her exclusive enamel pin.

Feeling lucky? The good-hearted ghouls at Mezco are giving-away one of these figures, but you’re got to hurry. Deadline to enter is Monday September 25, 2017. Hit this link to go to entry info.

Otherwise, you can ensure Sweet Tooth visits your digs to leave a little something under the pillow (maybe your ear) by pre-ordering her, or by visiting Mezco’s Display Booth (#1954) at the upcoming New York Comic Con (NYCC). 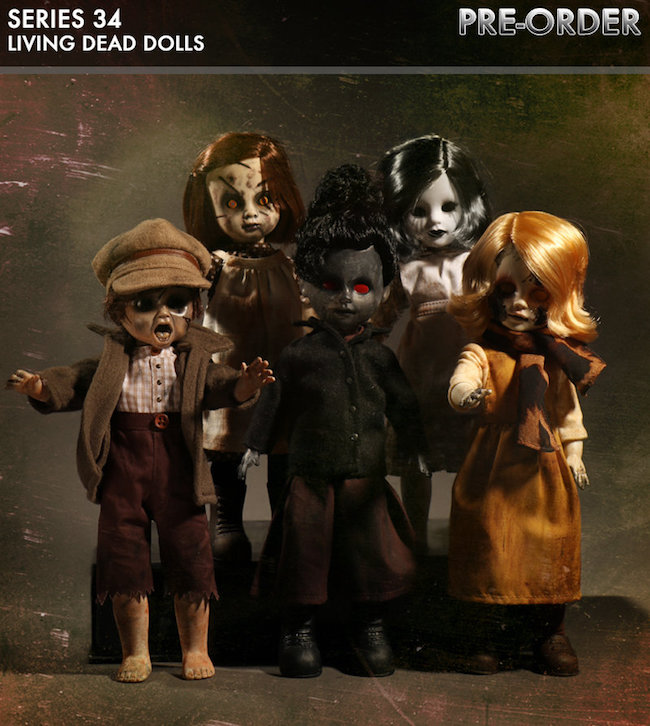 To inspire you to greater depths of doom in your costume creation we offer this unique image gallery of Living Dead Dolls and other licensed figures captured at Mezco’s Sanctum Sanctorum just before The 2017 Toy Association’s Toy Fair.