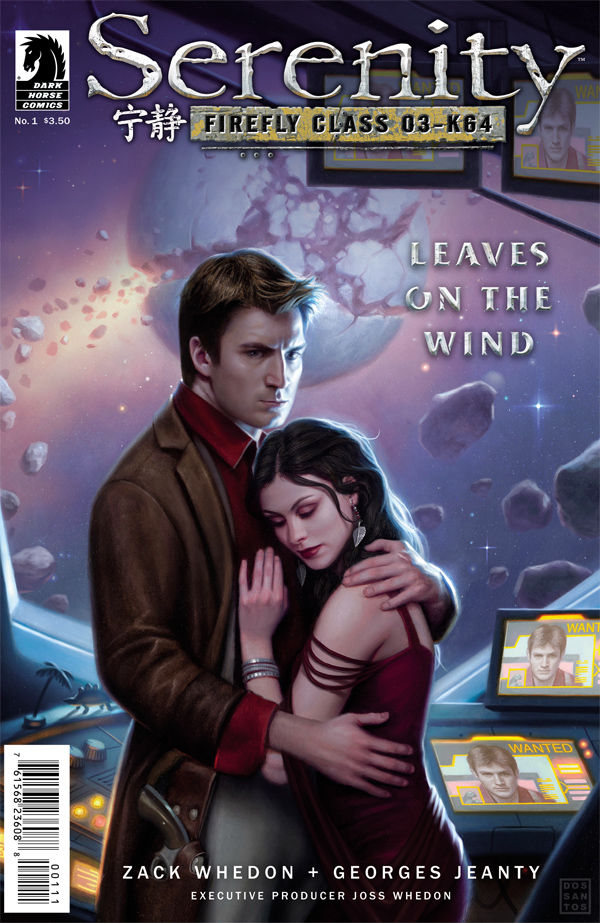 “You are a leaf driven by the wind.” – Herne the Hunter (Robin of Sherwood)

It’s fitting for me to link two of my favorite series together via the above quotes. Both are about a misfit band of outlaws on the run. Though not always merry, you can burn the land and boil the sea, but you can’t can’t keep a good ship down.

That’s right, Mal and the crew from Joss Whedon’s space western, Firefly (which ran on Fox from 2002-2003) make their welcome return in the form of new adventures from Dark Horse Comics.

For those who are a bit fuzzy on the details, here’s a recap. Firefly/Serenity is set in the 26th century across hundreds of moons which have been terraformed to become New Earths, capable of sustaining life. Human settlements colonized these moons, as it would appear our Earth could no longer sustain life.

In this future, two super-powers emerged, fusing to become one central government – The Alliance. Think more in terms of the Peacekeepers (Farscape) and less like the Federation (Star Trek). Sadly, this brave new world looks a lot like our old one, with huge gaps between the rich and the poor, and many struggling to survive. This new world order, and the fight for independence from tyrannical government control, is where our 26th century Robin Hood comes in.

When Mal picks up Dr. Simon Tam (played by Sean Maher – Warehouse 13, Arrow) and his mentally-unstable, younger sister River (Summer Glau – The 4400, Sarah Connor Chronicles), things really start to go wrong. Truth be told, you can say Mal wasn’t exactly born under a lucky star, having been on the losing side of the War for Independence (the Browncoats’ attempt to rebel against Alliance control). The decorated war vet was forced into a life of crime. A small price to pay for his freedom from the Alliance, he reckoned. Until they came after River…

Child prodigy River Tam was the subject of cruel government experiments, which had permanently altered her brain. The unpredictable outcome of these experiments left River fractured, an open, raw nerve, incapable of governing her own emotions and vulnerable to the thoughts and emotions of others.

No one could foresee how powerful River would become in the process. Her gift of intuition evolved into powerful psychic powers (empathy, telepathy, mind reading). River also picked up the ability to acquire (or absorb) additional skills with little or no effort, including hand-to-hand combat and deadly accurate aim with a gun. She’d become the ultimate weapon — making her quite valuable to some and quite dangerous to others.

Where We Left Off…

When we last saw our heroes (on the big screen almost a decade ago), they were running from the Alliance and bounty hunters — all after River. In the process, they uncover the Alliance’s darkest secret — their role in the deaths of countless millions on the planet of Miranda.

An attempt by the government to chemically pacify the population on the colony of Miranda goes horribly wrong. The inhabitants become peaceful to the point of complete indolence, killing almost all of them — all except for a small number. The experimental drugs triggered psychotic behavior in the remaining colonists. No longer human, now savage cannibals known as the Reavers, they’ve gone on to terrorize the outer planets.

“If your quarry goes to ground, leave no ground to go to.“

The crew of Serenity go to great lengths, at great cost, to reveal this secret, sending a transmission that reaches across the galaxy, but not before losing two of their own. Former crew member, Shepherd Book, is murdered for offering his friends shelter, and after leaving Miranda, Serenity’s pilot, Wash, is impaled by a Reaver harpoon.

I shed quite a few tears that day. I kept hoping for a happier ending…
The Outlaws Return/Dark Horse Rides to the Rescue…

We knew that couldn’t be the end for our heroes. Like I said, you can’t keep a good ship, or its crew, down. Fan outcry at the premature cancellation of the TV series inspired the Serenity (2005) movie. Again, their unwavering love and loyalty inspires Serenity’s continuing adventures.

Leaves on the Wind follows the events of the theatrical release almost a year after the deaths of Wash and Shepherd. We see what’s left of our heroes… battered and bereft, but never broken. Without giving too much away, I will say Mal and the gang are still on the run, with enemies (both old and new) in hot pursuit… with new challenges to face…

Written by Zack Whedon (younger brother of Firefly and Buffy The Vampire Slayer series creator, Joss Whedon), this latest treatment by Dark Horse (there have been others), beautifully illustrated by Dan Dos Santos and Georges Jeanty, definitely looks and feels like the real deal. I could easily see this as an episode of the TV show. 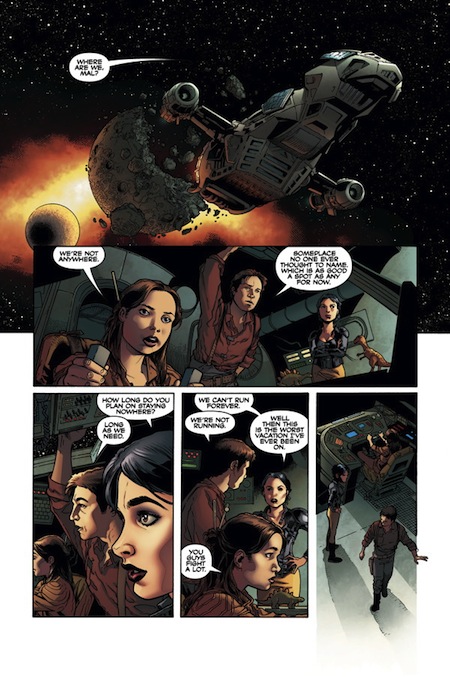 I will be honest and say that I wasn’t initially a fan of Firefly. It can take me a while to warm up to a show. I was the same way with the X-Files, Fringe and a few others, but once I find the heart of it, I am forever loyal.

Firefly definitely had, and still has, heart. Unfortunately, like many shows, it takes about a season for a new series to find its feet. Sadly, Firefly was cancelled by the 11th episode of its 14-episode run. Upon second viewing, however, I saw it for the gem it was. Had it been renewed, I believe it would have had a long, successful run.

While the tone of Issue 1 is somewhat somber, lacking some of the wit and verve the Whedon brothers are known for, it is to be expected, given the circumstances. As we may never get to see our beloved crew on screen again, Leaves on the Wind is a must for the die-hard Firefly/Serenity fan. I  look forward to future installments.

Check out Issue Number 1 of Serenity: Leaves on the Wind, at a comic book store near you today.

Firefly the TV series and Serenity the movie are both available on DVD (also for streaming on Netflix.)