We just alerted you to Toy Insider’s list of the best 12 things to gift for under $12, but we can’t resist making it a baker’s dozen, a lucky 13, with a pick of our own.

Elvis once sang “little sister don’t ya do what yer big sister done” but in the case of Hairdorables Short Cuts it might not be such a bad thing to emulate the success of older siblings.

Just Play Toys began showing Hairdorables, their line of dazzlingly coifed dollies, a couple of seasons ago. Their hairstyles range from cascades of multicolored curls, bouffants and bobs, ponytails and plaits, to 70’s afros that would make a nimbus cloud jealous. The response has been strong enough for Just Play to release three Hairdorables series and spin off additional products. Last year Pet companions with a similar penchant for pedicure began to accompany the young ladies, followed by a handful of fellows known as the HairDUDEables. 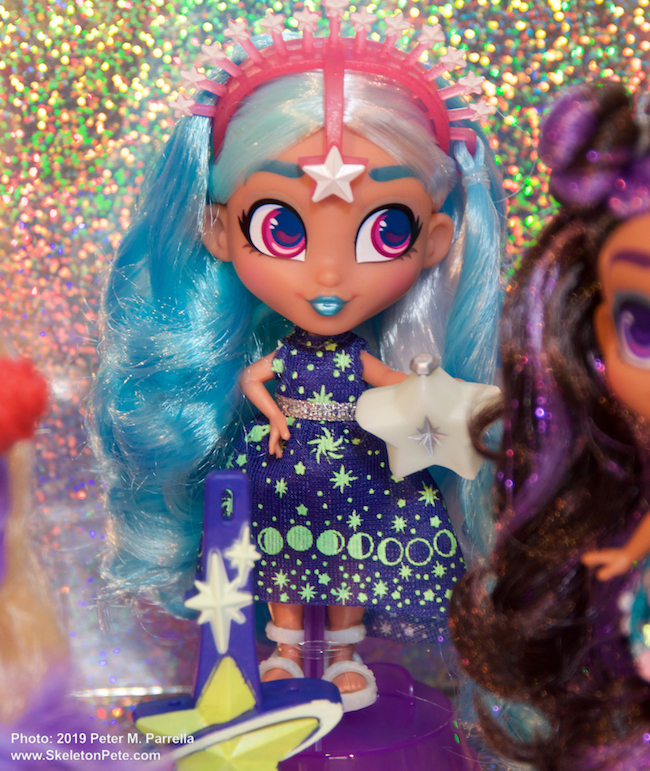 Cut Across Shorty…
Most recently the kid sisters known as the Short Cuts have appeared. Short Cuts come mystery wrapped in a shampoo bottle like plastic package. There are 25 different variants in Series 1. Each package includes 8 surprise accessories like barrettes, scrunchy skirts and pop-on pig tails. The included signature card tells you what you need to know about your doll’s personality.

At under $10 per mystery pod Short Cuts pack a lot of play value and a fun unboxing experience for youngsters. Suggested age is 3+.

Style for the Camera…
Over the course of the last several Toy Fair, TTPM, Sweet Suite and Holiday of Play events we’ve amassed a mad amount of photos of these irresistibly cute figures. See the gallery below for some of our favorites.

SkeletonPete Says…
Andy and I were happy to see several musically talented, guitar strumming, dollies in the Hairdorable family, but I’m really hankering for at least one with a Ronettes worthy, gravity defying, beehive. Da Doo Ron Ron, Da Do Ron Ron.

Just Play produces several other personal favorites like the PJ Masks and Vampirina figures and playsets.